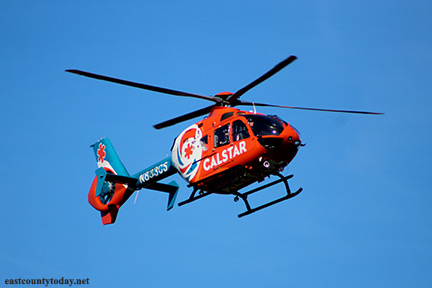 At 8:04 am Wednesday, the East Contra Costa Fire Protection District responded to a report of a dog bite in the area of Arcadia Circle off S Lakefront Loop in the Town of Discovery Bay.

According to reports, a female sustained 3-dog bites. A medical helicopter was requested and units arrived on scene to provide medical care.

CALSTAR was expected to land just after 8:30 am.

By 8:50 am, BC5 reported the medical helicopter was enroute to a local hospital and they were breaking down incident command.

At about 8 o’clock this morning, Deputy Sheriffs were dispatched to the 5500 block of Arcadia Circle in Discovery Bay for report of a woman who was being attacked by her own dog.

When Deputies arrived, the victim, who had severe bite wounds in several areas on her body, was on the ground being assisted by neighbors. The dog ran off before Deputies arrived.

The dog later returned. Deputies attempted to corral the dog. Because of the dog’s earlier attack and because it moved toward bystanders, a Deputy was forced to shoot the dog, which died.

Because of the nature of her injuries, the victim was taken to a local hospital by helicopter. She is said to be in stable condition.

Contra Costa County Animal Services is following up on this incident and will be looking at what led up to the dog attack.

SIGALERT Issued on SR-4 at Marsh Creek After...

Im glad they shot the dog, cant be having that sh it. I love dogs, but that crosses the line. I would have shot that dog if it bit a family member of mine.

I have two Pitbulls, ignorant people like yourself make me laugh.

Of pitbulls are worthless!

I totally agree with another Nick. Those dogs are dangerous, and owned by lowlifes. It’s the dog of choice for lowlifes, but not all pit bull owners are bad. A dangerous breed, and an irresponsible owner is a recipe for disaster. If pit bull owners don’t like the “reputation” – own a different breed. Nobody forced you to won a certain breed.

I bet you she was feeding it a vegan diet, so the dog was starved and lost its mind.

Stupid people! How the hell you going to blame an animal when it’s the PERSON who owns it who teaches it how to be.
Wth You all are some ignorant human beings.

I’m sure you think GUNS kill people also. Disappointing people in this world.

You can teach a dog all you want, but at the end of the day, it’s still a dog and will do whatever it wants to do. Including bite, attack , eat , etc. Any person or item. It doesn’t matter if its the owner or not.

It was a Akita, not a pretty scene

The dog was actually an Akita and it was her own dog so who knows how something like that could happen. Hopefully the lady is okay. My friend was there on the scene and said she was torn apart pretty good.

Please kill all attacking bully dogs. That way they die happy, doing what they love.

That way they’ll never maul again.
That they won’t languish and die at a “sanctuary” such as Spindletop, Olympic Animal sanctuary, or Lindsey Morrow’s Bully Breed Miracle Network and Rescue.

When good” bully dog attacks without first trying to avoid conflict, then immediately inflicts severe injury, and doesn’t stop, dog fighters say that the pit has “started, turned on, lit up.”

This often happens between 18 and 36 months of age but some puppies are “on fire” and must be separated from littermates to prevent puppy murders. Other dogs act normal for many years, till seniors, but then suddenly attack and maul. These are called “late starters”.

This dog suddenly became a “good” pit bull, “turned on” and attacked.

Pit bulls are like handgrenades. Perfectly safe, play fetch with them, put them in bed with the kids, perfectly safe until they suddenly they aren’t.

It’s instinct: inside, invisible and impossible to predict, that pulls the pit bull “pin”.

Of course pits/bully dogs suffer too from these horribull man-made mutations. This one is dead.

A beagle cannot help herself when she barks her annoying beagle bark either.

“Good” pit bulls are intentionally bred to mature to suddenly have the drive to attack on instinct alone.

No fear or anger is necessary to have beagles torment rabbits.

They know that bully dogs are the best at maiming and killing dogs, even far from home, with no resource in sight .

Proof is the fact that essentially all NA and UK dog men choose only pits.

Yes all dogs can bite but dog fighters don’t use dachshunds or dobermans because these dogs were not intentionally bred to kill their own family, as pits were and still are.

It’s cruel to support dog fighters by permitting them to breed their most essential piece of dog fighting paraphernalia: the game insane bully dogs.

If Pits are so lovable and great nanny dogs why not breed them as tea Cup size ? Then your neighboors don’t loose an arm gardening in their own garden and your kids can have the face they where born with and everyone can be happy !My point is: when they snap it is way to bad ! Get another breed of dog and love it !