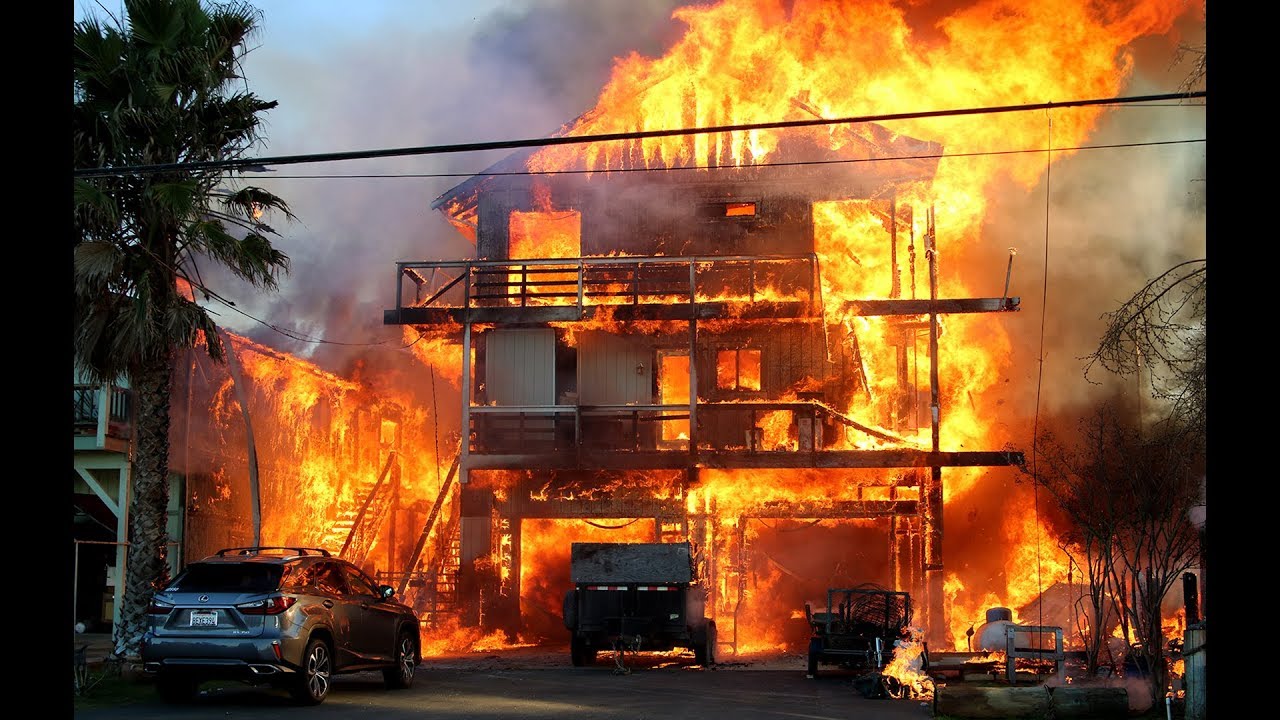 At 5:50 pm, East Contra Costa Fire Protection District was dispatched to a report of a residential structure fire in the 2700 block of Taylor Road on Bethel Island.

It was reported that a house was on fire and while responding, Station 53 reported heavy black smoke was showing from Oakley. Dispatch then received several more calls saying multiple homes were on fire with at least one home that had exploded with flames at least 20-feet high.

Engine 53 arrived on scene and immediately called for a second alarm response along with a fire boat response and breathing support. Contra Costa County Fire was requested for aid response. Both Contra Costa County Office of the Sheriff and California Highway Patrol responded to the scene to shut down the roadway and provide traffic control.

Fire units from the City of Oakley, City of Brentwood, Town of Discovery Bay, City of Antioch, and City of Pittsburg all responded

By around 8:00 pm, firefighters had prevented forward progress and contained the fire to three homes and potentially saving another 3-to-4 neighboring homes.

Firefighters also said they had no reported injuries and at least 3-people had been displaced.

As of 9:15 pm, firefighters were working on “hot spots” before they could begin mop up duties.

Letter: How to Use Antioch Measure W Funds

i live on bethel island the fire department is useless they dont put out fires
I DONT UNDERSTAN WE ALSO PAY A TAX FOR FIRES on our TAX BILLS
WE ARE THE BAD STEP CHILD WHO THE COUNTY DEBBIEDOES NOT CARE
ABOUT.

Look where you are!!!! Think how long it takes fire apparatus to get there from Pittsburg, Antioch, etc.

Debbie- I live in Oakley and am concerned about our fire services too. The difference is that I have taken the time to be informed about the issues and also have been willing to support the fire district in passing an extremely affordable solution to the the problems we face. Several times the citizens have refused to pay an additional tax to address many of the issues. I paid for the public schools (and still so on my taxes) despite my son going to private school. The last ballot several years ago was for approximately $100.00/per residential property. This would have re-opened the Bethel Island station and Knightsen station 24/7- the 2 closest stations to Bethel Island. Yes if you’re a property owner, you pay an EXTREMELY disproportionate amount compared to surrounding areas for fire tax- only enough for volunteer departments which worked fine until about 2000 or so. The fire department does respond to medical calls- but from Oakley, so they may or may not beat the ambulance. Fires are extremely rare now days, thank God. But they do happen. A house blowing up and spreading burning debris to surrounding houses- not your typical fire. The exploding house(callers description) could never have been saved- PERIOD. Sad but true. The exposures (objects next to initial fire) POSSIBLY could have had their damage reduced, POSSIBLY- if the 2 stations closest to you were open AND not on other calls further away. Seeing the video and intensify of the fire, that’s a big IF. In a situation like this one, the appropriately did their job…put their lives on the line( and yes, it’s true that because they are professionals, they would have even fought a fire at your house and put their lives on the line for you- even though it appears you are an ungrateful, uninformed/ slanderous human). I suppose the fire that destroyed Paradise was the firefighter’s fault- not some rare, freak wind driven fire that was faught the best they could with the resources available. Oh, and the people up there understand firefighters are humans( and not God and can’t do miracles) and are truly heroes for risking their lives to help compete strangers. People die and fires burn crap- always happened and always will. The difference here is our firefighters are doing it for significantly less pay and benefits than surrounding areas. If I were them I would leave to take a better job where they’re appreciated and supported more- rather than stay here for less because they love being here(by choice).BTW, the increase in your fire insurance is significantly higher than any ballot measure people shot down in BI. Go to some meetings, rally your BI neighbors to gather to go…get support to have a special distrct to re-open BI fire station,etc,etc. Better yet- make some food for a station, deliver in person and apologize. While you’re there, sign up to do a ride along to see how hard they work. If you’re up to it- become a firefighter if you know how to fight fire and they don’t. You chose to live there, like the people on Marsh Creek. They know what they signed up for. And if you lived there as a homeowner when they shut down the station, then you KNOW the issues and shame on you for blaming the firefighters!!!

That was a novel of a comment!
The fact is Bethel Island pays the highest tax rate of all east county communities for fire yet has no fire station.
Wait for it, the new tax proposal after 3 times no and half a million dollars later is coming again soon. Strange that Bethel Island has lost five homes recently. I hope there is no pattern to this. Anyway the new station on Cypress I’m in progress. That is a good thing.