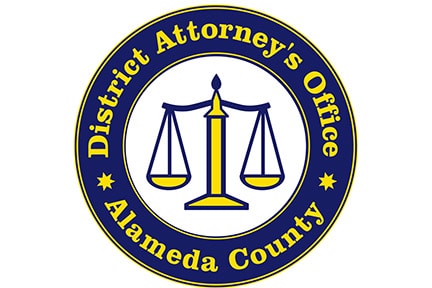 An extensive investigation that spanned four months and involved 31 cities and ten counties throughout Northern and Central California culminated in a coordinated search and arrest operation conducted on Thursday, August 29, 2019 in Oakland, San Leandro, and Pittsburg, CA.

Eight men and women were arrested. Additionally, six guns were seized including an assault rifle, along with two illegal ammunition magazines, stolen property from the thefts, and other physical evidence.

Beginning in December of 2018, UPS and Fed-Ex delivery drivers were preyed upon as they delivered merchandise to cellular telephone stores. The suspects would rush the drivers as they approached the stores with boxes of merchandise, grab the boxes and run to vehicles that displayed paper dealer plates. In some cases, force or fear was used in the crimes. Beginning in May of 2019, the Alameda County District Attorney’s Office Special Prosecution Unit met with UPS and Fed-Ex security representatives to review the cases and hosted meetings with multiple police agencies that had similar incidents in their respective jurisdictions.

In the course of its own investigation, Pleasant Hill P.D. was able to obtain a palm print left at one of the thefts by a suspect. Following the identification of the initial suspect, the Alameda County District Attorney’s Office, in conjunction with Oakland P.D., CHP-Investigative Services Unit, Fremont P.D., Sacramento P.D., San Leandro P.D., Tracy P.D. and Union City P.D. dedicated resources to conduct the investigation to identify others involved in these crimes.

An additional 11 individuals were identified to be involved in the scheme. The loss from the robberies and grand thefts, including some crimes not charged, total approximately one million dollars.

“These bold robberies endangered the victims as well as the communities in which they took place. I am dedicated to ensuring that each participant in this criminal enterprise is brought to justice,” says DA O’Malley “The investigation and operation were professional and well executed and I thank all our partner agencies for their hard work and dedication.”

The defendants arrested in the Bay Area are:

Those seven defendants were arraigned in Alameda County Superior Court on Monday, September 3, 2019.

Defendant Isaiah Langley, 23, was taken into custody in Lake Forest, Illinois and is expected to be brought to Alameda County for arraignment at a future date.

There are active warrants for the arrest of four additional defendants, and felony charges are forthcoming: