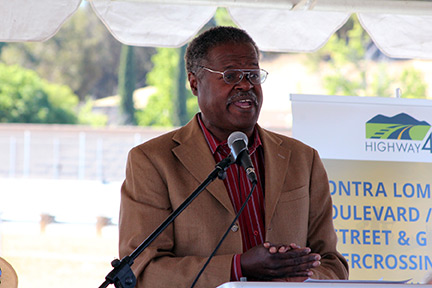 “I’m so proud of our accomplishments and excited to be applying for a final term to complete the good work we started,” said Glover. Glover has been one of the County’s top transportation advocates, identifying funding to improve Highway 4, I-680, and bring BART to Pittsburg and Antioch.

“We’re in the beginning of negotiations on establishing possible ferry service to San Francisco from Hercules, Martinez, Bay Point and Antioch, and I want to see that through completion for the residents I represent,” Glover added.

Other accomplishments that make Glover proud: Bringing the County into a AAA financial rating due to sound budgeting decisions, establishing three Family Justice Centers to support victims of domestic violence, increasing prosecution of human traffickers who kidnap and victimize young women, strengthening the Industrial Safety Ordinance to reduce refinery accidents, and leading the fight to protect open space, our hillsides and maintaining the County’s Urban Limit Line to control growth.

Glover says that making PG&E accountable for upgrading its service, and working with cities to create alternative forms of energy to decrease the company’s issuance of power outages is another issue he is working on that requires more work.

“Supervisor Federal Glover was there for our firefighters and our residents during the massive fires we experienced the last couple of years. We wholeheartedly support Supervisor Glover’s re-election and look forward to working closely with him for another term,” said Firefighter Vince Wells, President of Contra Costa Firefighters Local 1230.

“We have a great campaign team and I will raise whatever donations necessary to run a top-notch campaign to the voters of District 5,” Glover added. “This will be my last term on the Board of Supervisors, and I’m excited to complete the projects important to my District.”

This guy is the epitome of a worthless politician who doesn’t do shit!! Living on tax payers money for years!!! POS!

Hell No!!!! This is the same clown that dumped all the Section 8 vouchers for Contra Costa County in Antioch 15 years ago. Now a once nice city is a dump.

Yip…get him out.
Glover’s greatest adversaries live in Antioch. City leaders say he rarely shows up to their council meetings, was too slow to acknowledge problems with the county’s Section 8 subsidized housing program and isn’t responsive to Antioch’s needs.
“On a scale of one to 10, I give him a zero,” said Councilman Arne Simonsen.
For years, city leaders complained about the Section 8 program and its rowdy tenants, disheveled yards and other quality-of-life problems.
Glover got serious about the problem after a 2006 federal audit slammed the county for sloppy recordkeeping and other mismanagement of the federally mandated program, Simonsen said.
Glover said he took appropriate action, hiring new leaders at the county Housing Authority, opening up an Antioch Section 8 office and convening town hall meetings to understand what quality-of-life issues were affecting residents.
Glover knows firsthand about bad tenants. He’s a Section 8 landlord and in the past decade has had to evict tenants from an Oakland house for selling drugs and failing to pay rent.
“When residents of Antioch have a bad experience, I know it can be a person’s worst nightmare,” Glover said. “I hear what they are saying.”
Glover’s actions in Antioch were too little, too late, said the city’s mayor, Don Freitas.
“Federal Glover has failed us tremendously,” he said.

Sounds like he has all the answers. What is your answer for all the homeless in your county? With all these important endorsements from your donors you should hold a hat out and get them to pony up some cash for them. This way maybe the city of Antioch can use there money for something other than homeless department.

Oh no! Not him again! I don’t care if he’s endorsed by Jesus Christ himself! This guy is useless Does nothing but gets in the way! One has to be a total idiot to vote for him!

Oh yeah! He sure protects our hillsides from development. We can see how much he protects those while we drive along Hwy 4 and see all those ugly houses on the hill above! It’s obvious he’s in Seno’s pockets.

Something must truly be wrong with the public for voting for this guy to just take up space, get paid and do nothing. He has ruined his district turning the cities into ghettos! This man must be stopped before he totally destroys Antioch, Pittsburg and nearby cities!

The County Registrar should have taken his application, torn it into pieces, thrown it back at him and told him, “NO! You’re NOT running again and wasting tax-payers’ money, Chum! — the gravy train is empty!”