The Oakland Police Department confirmed Monday afternoon on Twitter that a pet transportation van with 25-30 rescue dogs inside that was stolen out of the City of Fremont has been recovered. 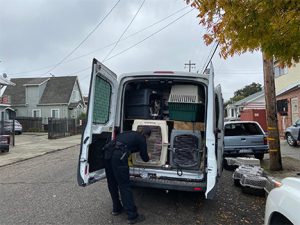 Police say the suspect may have attempted to sell the dogs before police were able to locate the vehicle during a traffic stop.

D&J Pet Transport had posted photographs of the van asking the public to assist them in recovering the van and dogs.

According to Fremont Police,  the van was stolen sometime during the night between 10 pm – 5:20 am, from the Extended Stay Hotel in Fremont. While secured by the transporter, the dogs were in the vehicle with it running (keys in the ignition) overnight. The van was equipped with GPS.

Oakland Police and Oakland Animal Control are working with the driver to count and locate all the stolen dogs. If you purchased a dog this morning from a man driving this van either in Fremont or Oakland please contact Oakland PD or Fremont PD.

Danville Police Nab Pair of Porch Pirates Out of Concord

Frazier’s Statement on Governor’s May Revise

Someone should have stayed with those dogs while they were in that van overnight.

Too many dognappings for comfort. Hope all are recovered and in good health.