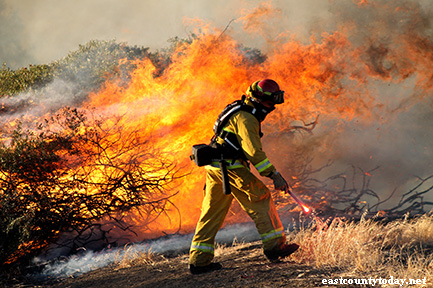 SACRAMENTO – Sen. Bill Dodd, D-Napa, lauded the Legislature’s approval of a $20 million pilot program he promoted to expand the use of controlled burning to prevent wildfires. The investment comes as Sen. Dodd’s own Senate Bill 332, which also would advance the use of the proven firefighting tool, won legislative approval and awaits a signature from Gov. Gavin Newsom.

“If we want to reduce the frequency and destructiveness of wildfires, we must remove combustible fuels from our tinder-dry forests and woodlands,” Sen. Dodd said. “Prescribed burning is a time-tested solution to this worsening problem. I am thrilled to see this come to fruition and thank my legislative colleagues for supporting this worthwhile investment.”

The $20 million line item was contained in the Senate Bill 170 budget trailer approved late Thursday by both the Assembly and Senate. It establishes a pilot program to provide liability insurance for controlled burn professionals. Due to rare instances when their fires burn out of control, many are unable to afford high premiums, effectively preventing critical risk mitigation work. It complements Sen. Dodd’s SB 332, which changes the law to require a showing of gross negligence on the part of controlled burn users before they can be found liable for paying suppression costs.

The pilot program was advanced by The Nature Conservancy, which also backs SB 332. Sen. Dodd’s bill has additional support from more than two dozen groups including foresters and ranchers.

“Since his earliest days in the Legislature, Sen. Dodd has led efforts to fund science-based approaches to accelerate wildfire prevention across the state and reduce the risks of megafires for nature and people,” said Jay Ziegler, director of external affairs and policy at The Nature Conservancy. “Returning fire to the landscape is essential for forest health and for reducing the impacts of wildfires to our communities. We greatly appreciate his leadership with Senate Bill 332 to establish liability protections for prescribed burners in California and for securing $20 million to establish a prescribed fire claims fund as part of the wildfire resilience budget. These measures are critical to reduce the growing wildfire risk in the face of climate change.”

Senator Bill Dodd represents the 3rd Senate District, which includes all or portions of Napa, Solano, Yolo, Sonoma, Contra Costa, and Sacramento counties. You can learn more about the district and Senator Dodd at www.sen.ca.gov/dodd.

Bill to Protect Californians from Ghost Guns Heads to Governor