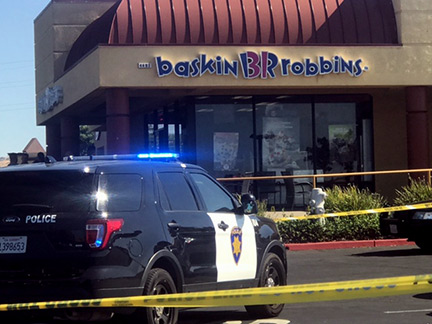 At around 3:00 pm, Pittsburg Police responded to Century Plaza for a report of a shooting that left at least one man transported to the local hospital.

According to a witness, the male was sitting outside Baskin-Robbins eating an ice cream when he was shot and police appeared to be performing CPR prior to fire crews arrival.

No details have been released by Pittsburg police as of 3:35 pm and the males condition is unknown.

On July 19th at 3:00 in the afternoon, Pittsburg Police Officers responded to the Baskin Robins on Century Boulevard in regards to a reported shooting.

The victim, a resident of Bethel Island, was transported to Sutter Delta Medical Center and succumbed to his injuries.

The Investigations Division responded to the scene and took over the investigation.  Based on initial information, it appears the victim and suspect knew each other. Detectives are currently contacting witnesses and obtaining additional statements.

Is the suspect in custody?

The man was not outside eating ice cream when he was shot ? My girlfriend and I literally witnessed the entire event unfold before our eyes.. due to the fact my girlfriend left her phone at baskin and robins we went back & witnessed this crazy event never will I forget this .. the man’s last moments are on a video I have in my phone , it was an argument went bad but the victim was th e aggressor attempted to provoke a fight and ended up being shot and killed r.i.p.. so this news article is a perfect example of the lies and fear the media attempts to distill in the public to push their further unknown agendas to problems they’ve created . This was truly tragic I witnessed the man get shit and I saw the life leave his eyes.. iam done we will be moving from here soon

The information came from Pittsburg Police.

I’m the victim sister . can you please be in contact with me ?

He came to the church on the island , can u please keep us posted…

Can you report what you saw to the police please.

Why don’t you take the video to the police then???

Unbelievable. Can’t even have an ice cream in this sh$t section 8 town. Doesn’t sound like they caught anyone. They say Section I is for elderly and disabled but all I see is section 8 is for people running around shooting other people and dealing drugs.

Who mentioned Section 8? And according to Roadrunner, the victim was the aggressor. ???

You stupid lady dont blame housing.people like you need your ass beat for opening there mouth to soon.people do what they want to do because they are sick mineded not because there on sec 8.lol stupid lady.crime is every were you go no matter were you move

@dumb ignorant poorly educated stereotyping biiioooc’hh… Planet pittsburg not to blame…nor public housing…. And like most folks have paid into FICA…. They deserve, house, life, car insurance….. Equal. So again, I have my AA in computer business/science.. Never abused drugs or robbed anyone. . maybe worst case was cussed out DM.FKS like you. My condolences to both families involved.

You stupid lady dont blame housing.people like you need your ass beat for opening there mouth to soon.people do what they want to do because they are sick mineded not because there on sec 8.lol stupid lady.crime is every were you go no matter were you move

Whether right or wrong, she is entitled to her opinion but you’re dead wrong to say that her ass needs to be beaten for opening her mouth to soon. What you will on others eventually will come back at you twice as hard.

He was a very good childhood friend of mine. I am so saddened by this??

I was born and raised in Pittsburg too and no longer live there. My relatives have been living there for 70 years. As of late, I hate it and don’t care for it. Its not the Pittsburg I used to know. If the mention of ” Sec 8 city” offends you, then like the French are so fond of saying , “c’est la vi”.

Everyone seems to be missing a bigger problem. Why did a person need to be armed while at Century Plaza? How many cons are armed around us and we walk right passed them?

I just found out the person shot is Bobby, a friend of mine from church. he was a combat Veteran. And a really nice guy.