The Pittsburg City Council approved a ban of plastic bags Monday night in a unanimous vote. The ban  will take effect in January of 2014.

Under the policy, Pittsburg is proposing a citywide ordinance to stop the distribution of single-use plastic bags in grocery and retail stores. This would make it the first East Contra Costa city to consider the ban. The proposed ordinance would include a $250 fine to penalize merchants who don’t comply. The ban does not include plastic bags used by restaurants, plastic garment bags, or bags in grocery stores used for fruits and vegetables.

The ban appears to create an incentive for residents of Pittsburg to move from paper and plastic bags to reusable bags which is sweeping California over the past two years.

Pittsburg Mayor Nancy Parent stated that the enforcement would be up to the city and does not have to correlate with the hard date of January 15.

“The fact that we have a January 15 date for implementation, doesn’t mean it necessarily mean the Chief is instructed to send officers all over town on January 16 to enforce,” asked Parent.

City Staff stated it’s at the discretion of code enforcement.

“We don’t need to be pushing this; we need to educate business on this policy,” explained Parent who explained they need to give businesses a timeline to implement and get acclimated to the rules.

Mayor Parent stated they received a letter from the California Grocers Association that they supported it. Now it says they encourage the council to support the ordinance as proposed.  Meanwhile, the Hispanic Chamber of Commerce is in opposition of the ordinance.

City Staff explained this ordinance was modeled after other cities ordinance and similar, if not identical, to others within the county and State. While staff did admit it’s an ordinance with flaws, they encouraged the council to either go back and address Chamber of Commerce concerns or implement as is and then make adjustments at a later time.

Councilman Ben Johnson asked what would be the cost to manage all these processes.

“How much is it going to cost to manage this ordinance,” asked Johnson.

Staff replied there is no plan to increase city staff to manage this ordinance.  They explained there would be an increase of staff time but not increasing staff.

Councilman Johnson explained that the Pittsburg as well as other councils is looking at similar ordinances.

Staff responded they worked very closely with City Attorney and process they are taking is legally appropriate to move it forward. Staff further explained Pittsburg is not the first; they are third behind El Cerrito and Richmond while others are looking at it. They also shared this was not the first time Pittsburg has been the first in East County to pass an ordinance and others followed.

Vice Mayor Sal Evola explained why the County and State have not moved forward.

“The County, it’s my understanding, the reason they have not adopted it is because a court finding or some decision has come out that if any jurisdiction other than a city does a bag ordinance that it requires a $300,000 EIR. There are other jurisdictions that have looked at it, it has been talked about at the State and was rejected. Some of the comments was they wanted to give that control local leaders to decide what is best for their community,” said Evola.

Evola supported the Mayors comments that just because we put in an ordinance, doesn’t mean we have to enforce it right away. He further explained that the policy be looked at annually for review for at least the first three years whether it be through ordinance or consideration. 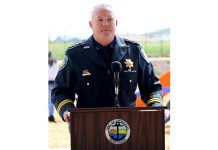