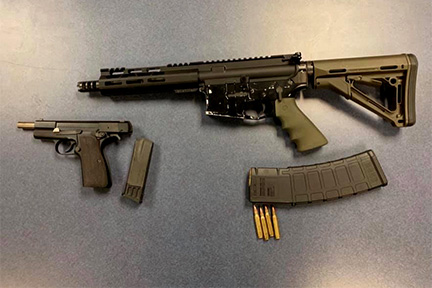 The Martinez Police Department say that at roughly 12:49 am Saturday, two officers were on patrol when they saw a car in the intersection of Pacheco Boulevard and Howe Road driving recklessly in circles.

They conducted a traffic stop and contacted the driver, 22 year old Concord resident Oscar ESPARZA-CABELLO. ESPARZA-CABELLO was arrested for reckless driving. While searching ESPARZA-CABELLO’s vehicle, the officers found a concealed 9mm Pistol, a short barreled, unregistered and illegal assault rifle and an illegal 40 round magazine.