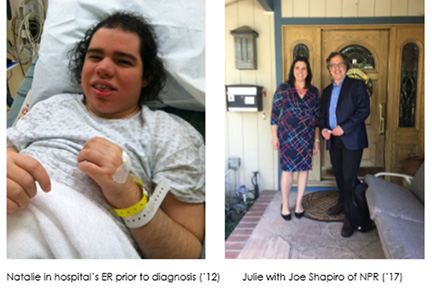 April is Sexual Assault Awareness Month. There is a vulnerable community who seems like they never make the headlines, that needs to change.  In January of 2018, highlighted in a special series titled “Abused and Betrayed”, Joe Shapiro of NPR exposed the sexual assault epidemic of those with intellectual and developmental disabilities. People with intellectual disabilities are assaulted at a rate seven times higher than those without disabilities #abusedandbetrayed #seventimes #metoomovement.

My adult non-verbal sister Natalie Rose, who has cognitive level of a 10-month old and cannot consent to sex, had a positive result for Gonorrhea in 2012.  My sister only lives with females in the home and there were months of visits to the medical community to help us solve what was thought to be common non-sexual vaginal infections.  From this diagnosis, we concluded that she was being sexually assaulted in the Bay Area community while at an outside caretaking facility, like a school, that we entrusted with her care and safety.

The investigation is still open, and the predator is still out there to prey again and again; justice has not been served.  The burden falls on the victim and their family. Mr. Shapiro covered our story on January 10th under the story title, ‘She Can’t Tell Us What’s Wrong.”

While we are living in a time of the #metoo movement, why are people with intellectual and developmental disabilities being left out of the national conversation and headlines?  Why isn’t the mainstream media and Hollywood supporting them getting their story out for awareness and support, if they are the most vulnerable?  As best said by Mahatma Ghandi, “The true measure of any Society can be found in how it treats its most vulnerable member.”

What are Cities, Counties, States and the Federal government doing to raise more awareness and collect data to drive change, given the fact that this vulnerable population is more likely to be assaulted by someone they know during daytime hours?

The data shows that predators target people with intellectual and developmental disorders as they are easily manipulated and will have difficulty testifying later on. Many of these crimes go unrecognized, unprosecuted and unpunished.

Is part of this because of Non-Disclosure Agreements with the entities where these crimes happen? This only protects the threat, which is a health and welfare crisis.

California has bill SB 820, STAND (Stand Together Against Non-Disclosures Act), which is going before the Judiciary Committee May 1st. The bill would ban settlements in cases of sexual harassment, sexual assault and sexual discrimination. The bill would permit the claimant to request confidentiality.  I will be there.

I understand that the police and prosecutors do not want to take these challenging cases, but that is a losing proposition for an entire Community.

After all, if someone will sexually harass or assault a person with special needs, what would prevent them from exploiting other people? A crime is a crime regardless of cognitive ability.

We must demand better.

I ask that you join me in raising the awareness of the sexual assault epidemic of this very vulnerable community.

Brentwood Mayor Provides Update at 2018 State of the City

There’s a special place in hell for these people. And at the penitentiary. Cons would make short work of this person.