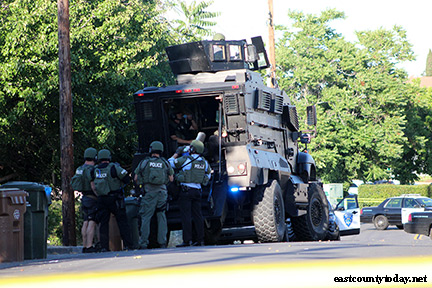 “It is time for our country to reimagine public safety in our communities. Arming police officers with military weapons will not make us safer. Safe communities are healthy communities, and achieving healthy communities will require us to re-evaluate spending decisions, de-militarize local police departments, and invest in education, mental health, access to health care, job training, and affordable housing. That’s why I’m proud to join my colleagues to introduce this amendment, which will discontinue the practice of providing military weaponry to local police departments,” said Senator Harris.

“Weapons of war don’t belong in our local police departments and should never be used against the American people,” said Senator Schatz. “As we see our communities turning into what looks more like a war zone, it’s clear that we need to fix this. There is a growing bipartisan consensus that giving local law enforcement military equipment such as bayonets, grenade launchers, armor-piercing bullets, and tear gas is immoral and does nothing to keep people safe.”

“One of the policies I examined closely while the Senate was discussing police reform legislation was the ‘1033’ program, which permits the Department of Defense to sell certain items to local law enforcement. Nobody I spoke with thought a police department needed things like grenade launchers, armored drones, or bayonets. Police should be there to serve the community, and there is no need for military-grade combat equipment to be on the streets of our cities in order to do that,” said Senator Murkowski. “This policy change will restrict some sales, while continuing to allow the ones that make sense.”

“Our bipartisan amendment, based on my Stop Militarizing Law Enforcement Act, which I have introduced for several years with Senator Schatz, confronts the federal militarization of our local police departments by preventing the Defense Department from transferring military weapons, including grenade launchers, bayonets, and weaponized drones, meant for war overseas to local police. It would do this while also ensuring officers still have access to protective equipment so they can do their jobs as safely as possible. I urge the Senate to pass this long-overdue reform,” said Senator Paul.

Reports have shown that police militarization fails to reduce rates of violent crime or change the number of officers assaulted or killed. Instead, arming police departments with military equipment has led to an increase in officer-involved shootings and civilian deaths.