“As home to the Rosie the Riveter National Historic Site, my district takes tremendous pride in celebrating their historical impact, particularly those who worked right here in Richmond at the Kaiser Shipyards. By joining the war effort and confronting gender and race discrimination, these dedicated women paved the way for future generations and left a legacy that continues to benefit our nation,” said Congressman DeSaulnier.

“During the Second World War, countless women answered the call of service by taking on new roles to support the wartime efforts at home,” said Rep. Huffman. “These ‘Rosies’ made tremendous sacrifices and contributions, redefining women’s role in the workforce, and setting a powerful example for women across the country. Decades later, they continue to inspire the generations who have followed in their footsteps. I have the privilege of representing some of these Rosies here in Congress and know the importance of continuing to honor them and the rest of these heroines for their bravery and service.”

“Just last week, we said goodbye to Rosalind P. Walter, the trailblazer who lent her name to the movement of women heeding the call to action during one of the most perilous times in our nation’s history,” Rep. Speier said. “The ‘Rosie the Riveters’ who joined the workforce during World War II are among our nation’s greatest heroines. During my time in Congress, I’ve had the privilege of working directly with some of these incredible sheroes, including Phyllis Gould, Marion Sousa, Mae Krier, and Betty Reid Soskin. They and all Rosies deserve recognition befitting their patriotism, service, and sacrifice.”

“Throughout our nation’s history, countless Americans have answered the call to service during times of conflict and turmoil,” said Rep. Fitzpatrick. “During World War II, women across the country – and across our district – left their homes for factory jobs in support of the war effort: Working as riveters, buckers, welders, and electricians. These ‘Rosie the Riveters’ embodied the ‘We can do it’ spirit forever connected with the famous poster. I’m proud to recognize these home front-heroes with a National Rosie the Riveter Day. I’m especially proud to represent a “Rosie,” Mae Krier of Levittown, who has worked tirelessly in advocating for this long-deserved recognition.”

Between 1940 and 1945, the percent of women in the workforce jumped from 27% to nearly 37%, and by the end of the war, nearly one out of every four married women worked outside the home. These ‘Rosies’ took positions across various industries, but the aviation industry saw the biggest increase of female workers – with more than 310,000 working in the aircraft industry in 1943, representing 65% of its workforce.

Phyllis Gould, 98, of Fairfax, California, was one of the first six women to work as Navy-certified journeyman welders at the Kaiser-Richmond shipyards from 1942-45, providing the weapons and ammunition to help end the war. 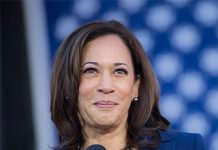 Editorial: What is Working in the Fight Against Covid-19 and What Needs Improvement

Governor Newsom Not Anticipating NFL Games With Fans This Fall