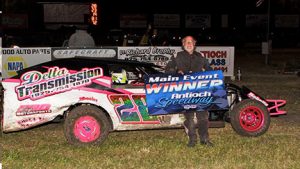 Chester Kniss #28 became the third different All Star Series A Modified winner of the season. Photo by Paul Gould.

Chester gained the lead when son Buddy Kniss spun in Turn 3 on lap eight. Buddy Kniss was going for his second straight victory and led a complete restart following a Sean Wilson spin in Turn 4. Chester Kniss settled into second early and inherited the lead with his son’s spin. Buddy recovered without need for a yellow flag and moved back up to challenge Michelle Paul in a close race for second. However, Chester Kniss drove a flawless race to collect the victory ahead of Paul, Buddy Kniss, Chris Sieweke and Shawn DeForest.

Brent Curran won the 20 lap B Modified Main Event. After back-to-back early crashes ended his previous two starts, Curran had been contemplating whether he wanted to come back or not. He had a front row start for the Main Event and set a rapid pace at the drop of the green flag. He was soon in slower traffic as point leader Cameron Swank had his hands full trying to hold off 2015 champion Fred Ryland. A lap 13 yellow flag was the only slow down of the race. Curran maintained the advantage on the restart with Ryland slipping past Swank for second. Ryland got close to Curran, but Curran was not to be denied the much needed win. Swank settled for third, followed by Trevor Clymens and Kevin Brown.

Richard Papenhausen won the 20 lap DIRTcar Late Model Main Event. Kimo Oreta led the first seven laps before Papenhausen made an inside move in Turn 3 and gained the lead. Papenhausen stretched his advantage to more than a straightaway ahead of Oreta by the time the checkered flag waved. Mike Hynes and Dennis Souza enjoyed a race long battle for third with Hynes coming out ahead. Rod Oliver rounded out the Top 5.

Shannon Newton won his third straight 20 lap Wingless Spec Sprint Main Event. Roy Fisher led the first four laps before Newton made an inside pass to gain the lead. Heat race winner Adam Teves moved in to challenge Fisher for second. This side-by-side battle went on for several laps before Fisher began to pull ahead. However, there was no stopping Shannon Newton as he won ahead of Fisher, Teves, McKenzie Newton and Rick Panfili.

Next Saturday night is the Third Annual Larry Damitz Memorial event. The All Star Series lineup of racing will include the DIRTcar Late Models, B Modifieds, Hobby Stocks and Bay Area Hardtops. For further information, go to www.antiochspeedway.com.