An update to the trailer fire that occurred Monday at 3:44 am as security footage has been provided by Service Pros Plumbers of Antioch that shows a man who came out of a trailer parked on Railroad Avenue near D Street break into their business. 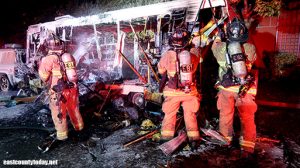 By 3:40 am, that is when the fire occurred in the trailer and the man can be seen running back out of the business and towards the trailer. The video also shows firefighters arriving on scene. 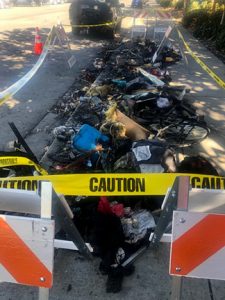 Contra Costa County Firefighters arrived on scene and reported a trailer that was attached to a vehicle on fire with two occupants having already exited the vehicle. The fire posed on threats to nearby commercial buildings, but for a brief time did threaten PG&E wires.

Firefighters made quick knockdown and cleared the scene in under an hour. it appears two people were displaced by the incident.

Antioch Police are still investigating the incident while Service Pros Plumbers now have to fix their fence, repair their boat and storage container. They also lost several items that were taken from their storage container and placed in the trailer by the thief which later burned.