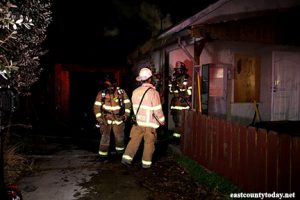 The first fire, a two-alarm response, was dispatched at 9:56 pm in the 19 block of W. Madill St off A Street. Firefighters arrived on scene to locate a fire at a vacant home which also was between two homes with smoke and flames showing.

The fire ultimately impacted three-homes, two of them being vacant.

A few minutes later, at 10:01 pm, another fire broke out in the 1200 block of A Street near W. 10th. Fire crews arrived to a fully involved commercial structure fire. This same building caught fire on Oct. 2, 2017 and in June.

East Contra Costa County Fire also assisted with aid on this call due to the two-alarm fire at the W. Madill location. 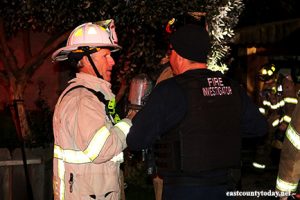 According to Battalion Chief Eddie Gonzalez both fires were suspicious and likely arson, but they were still investigating to determine the final cause. He noted that on the A Street fire, there may have been an accelerate inside the building because of how quickly the fire grew with flames shooting out of the roof and no one reporting it sooner with so many vehicles driving by. He added that the fire was still under investigation so it could not be confirmed as of Thursday night.

Earlier this week, Antioch was hit with two other suspicious fires. On Sunday, a church caught on fire on Lone Tree Way at Walton.  Early Monday morning, a florist shop on A Street was destroyed in a suspicious fire.

No further information was been released.

Here home the homeless bashers. Let me guess, a homeless arsonist? Has anyone ever heard of insurance fraud?

Nice work to all firefighters and Investigator Graham! A very difficult night. Now find the culprit and put’em in jail where they belong!

If a structure is vacant and/or abandoned, then you’re really asking for trouble. Houses are vulnerable. Didn’t the Mobil gas station also catch fire?

Will you blame the homeless for this too?

Maddening, they aren’t actively trying to catch these losers and people wonder why new businesses won’t come Antioch unless it is some fast food restaurant or a big box stale food store.

Is that why businesses dont open up here? Youre kidding, right?

Would you open a business here?

APD is too busy doing the easy work.

Its easier to blame others without knowing facts, right?

This is really scary! The empty old cremation building was full blast on fire with people driving past it and nobody called 911 … it was the firefighters on their way to the West Madill fire who saw the flames rising above the roof and called reinforcements! So, nobody could just take a minute to pull over and report it?

Im surprised that nobody has blamed Obama for this, yet!

Apparently, the homeless werent aware that it was a spare the air day.

Apparently, the homeless werent aware that it was a spare the air day.

Can somebody let the homeless know that its a spare the air day!

It was reported on the evening news last night that two people have been detained in association with the Thursday fires. I wonder if those two were also responsible for the destruction by fire of the flower shop on A Street. Time will tell.

what a completely dysfunctional city. everyday something in the news screaming don’t dare live or do business here. we have a majority of the bay area’s thieves, arsonists, kidnappers and burglars.

Antioch is a complete joke, a case-study in the dangers of liberalism and caution-to-the wind development.

Antioch has never been a nice city, and never will be.

Fire Fighters in Antioch are AMAZING, but their “investigators” suck. Really – after the MANY FIRES we’ve had in Antioch, you NOW think it’s time to start an arson investigation?
Unfortunately the Antioch Police Department is not very competent, non-responsive and plain don’t care and they assist with crime, not stop or prevent it.
Not all homeless are bad, but you have to add some controls if you’re going to provide services that attract so many of them.
The City of Antioch, from the Mayor’s Office down, needs to clean up it’s act. Stop overpaying city employees, terminate under performing city employees, stop the wasteful spending and operate efficiently. The apparent corruption needs to stop!

antioch used to be a family and friends town. backroads 4- wheeling and all the fun stuff. stupid low broke pittsburg folk and antioch city ruined all that. home prices are a joke. prime area to live if rif raf did not live.