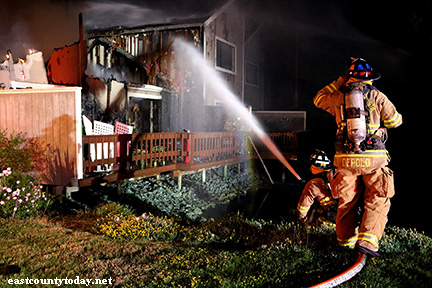 At 10:05 pm Tuesday. East Contra Costa Fire Protection District firefighters responded to a report of a fiveplex condominium structure fire in the Town of Discovery Bay. The fire went 2-alarm.

The fire occurred in the 2000 block of Sand Point Road off Discovery Bay Blvd. 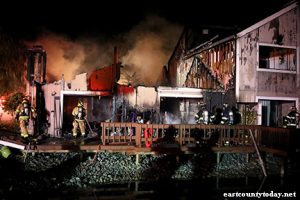 While responding, multiple callers reported a home with smoke and flames showing. Jim Huntze, an off-duty Contra Costa County Fire Protection District Battalion Chief who lives in Discovery Bay responded to the scene and reported smoke and flames through the roof.

With Discovery Bay’s engine on a medical call and based on the growing fire and distance of arriving units, Huntze requested a second-alarm fire response.

Upon arrival, units worked in a defensive fire attack as the fire was too big to go offensive. 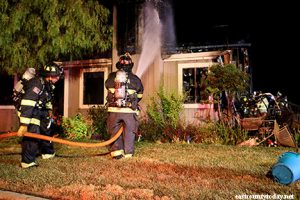 According to Battalion Chief Craig Auzenne, the fire was under control by 11:08 pm.

Auzenne stated two units were destroyed, with a third unit sustaining minor water damage. The fourth and fifth were untouched after firefighters mobilized into defensive fire attack to save what they could of the fiveplex.

“The guys did pretty good for what was happening out here with geography and response times,” explained Auzenne.

He added that having Battalion Chief Huntze’s eyes on the fire as invaluable to save the structure.

“Having him there, he preplanned it as units were responding and where to put the first engine on scene. The guys didn’t have to look on their own and create a plan, the benefit is they could just drive in and handle it as directed,” said Auzenne. “It was invaluable he lives in Discovery Bay and was at the right place at the right time which is why we appreciate our working relationship with Contra Costa County Fire.”

In total, at least five people were displaced which could grow to nine depending on the third unit being deemed inhabitable or not. That unit is still under investigation in terms of damage assessment. 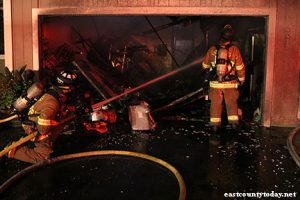 As of 7:00 am, Battalion Chief Auzenne was still on scene with the board up company securing the structure.  No injuries were reported.

Editors Note: With Antioch and Pittsburg units battling a fire in Antioch, several Contra Costa County Fire units on scene were from Pacheco, Concord, Bay Point that were moved up to provide coverage. Without move-up’s, the response times on the second alarm would have been much longer.

Byron: Firefighters Responding to Vegetation Fire on Near Hoffman Lane