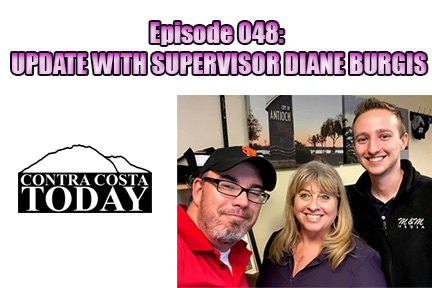 On this episode, I chat with Contra Costa County Board of Supervisor Diane Burgis who is recovering from open-heart surgery and is set to return to Board of Supervisor Meetings in April. On February 25, she had her aortic valve replaced. She talked about her road to recovery and what she has been up to while stuck at home.

We get into holding three elected positions over 6-years and how it has provided her perspective, Roddy Ranch becoming a park, why non-profit round-tables are a priority to her. We also discuss the importance of finding fulfilling work to do. Why she never takes credit for her successes but rather shares the credit with others. We then move into illegal dumping, impact of China on recycling, importance of the Census Count, homeless & blight while working on mental health. We also talk about drone technology and the testing being done by 3DR and the FAA at the Byron Airport. Finally, close with an update on the delta.

Please do us a favor and hit subscribe on any of the platforms you listen to podcasts on.

You do really nice neat interviews. Keep everyone comfortable. Did you ever think about asking questions like: How do we we fix ECCFPD and help Antioch who is struggling with optimal fire protection. Why don’t ECCFPD CONSOLIDATE and help the whole system? Help East county and Con Fire with Antioch.

It can be done. Here is you answers. The best part is it can go to the voters and the politicians, Burgis included can take credit for it. Win/ win.

EMERGENCY RESPONSE FOR ALL INITIATIVE

Here is the answer:
Timing. The fire district has not put forth a funding proposal since 2015, four years ago. (The 2016 UUT were put on the ballot by the cities.) If/When a parcel tax is put on the ballot it will require 67% approval to become law. It is highly unlikely that this threshold will be met, given the ten reasons I have previously articulate. When the “Emergency Response for All” initiatives plan gets widespread community awareness, that may indeed be viewed as an eleventh reason the parcel tax fails. An educated voter is not a confused, unless the vote doesn’t go the way you want, I guess.
Where did the idea originate? The idea originated at a meeting last October, organized by a then-member of the ECCFPD Board of Directors. In attendance were two members of CoCoTax leadership, the county Controller-Auditor, two members of ECV leadership, and the then-ECCFPD Board member. Several other people have come to the same conclusion about the idea being a stroke of “genius,” including one of the state’s leading initiative attorneys who is helping with this effort.
Third Point, (Timing again). Included in the each version of the “Emergency Response for All Initiative” will be a provision to suspend implementation, should sales and property taxes fail to grow at acceptable levels. Should there be a major recession, Brentwood has a 30% Operating Reserve Fund, ECCFPD has a 20% Reserve Fund, and Oakley has a Reserve Fund as well, although I don’t know what it is. Should the economy take a dive each entity should be able to manage their way through it. Brentwood, for instance, did not touch their 30% Operating Reserve during the Great Recession of 2008.
Timeline of funds to ECCFPD. Total Designated Expenditure (Brentwood and Oakley, not the County) The Brentwood and Oakley Emergency Response for All Acts would provide funding for “fire protection services, rescue services, emergency medical services, hazardous material emergency response services, ambulance services, and other services relating to the protection of lives and property.” (Health and Safety Code Section 13801)
Year Amount
1 $995,415
2 $1,990,830
3 $2,986,245
4 $3,981,660
5 $4,977,075
6 $5,972,490
7 $6,967,905
8 $7,282,605
9 $7,597,305
10* $7,912,005
* – and every year thereafter.

Working together. ECV is very willing to work with ECCFPD to pursue reasonable sources of additional funding. ECCFPD has never once asked ECV to do anything, or to contribute community insight, primarily because our opinion is that given history and the facts, it is highly unlikely that any new tax will be supported by the voters to the degree required to pass. The only way forward, to increase operating funding of ECCFPD, is through a no-new-tax policy decision by the voters.