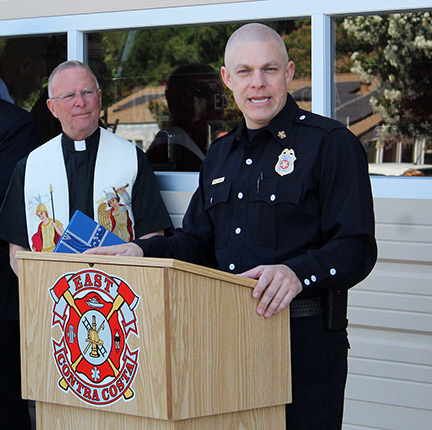 The following was submitted by East Contra Costa Fire Protection District Fire Chief Brian Helmick who provided a year in review for the District.

Brentwood, CA —  I would first like to wish everyone a Happy New Year and hope your holiday season was enjoyable while allowing you a chance to reset before the busy year ahead.

In April of 2017, I was named the Interim Fire Chief for the East Contra Costa Fire Protection District and was appointed by the Board of Directors as the permanent Fire Chief in October. As I worked on getting up to speed with all the functions of the Fire Chief position, I found that the year was really about working to stabilize our service level and establishing a solid foundation upon which to build future service improvements.

When I started in April of 2017, it was apparent that there were many systems and processes that needed to be improved. Initially, my primary objectives were addressing the District’s retention challenges and assuring that the District operated as efficiently as possible with the revenues available. This required transitioning the District to a three-station operation model (although the current District Master plan calls for 9 stations to adequately serve the District).

The District has a long road ahead in its effort to improve service to our customers.  I believe the District’s staff has made good strides and begun to build a solid foundation for future growth. I am a firm believer in working as a team. What we have done over the past nine (9) months within the District internally is give our line-personnel additional responsibility and a voice in the future of the District. Specifically, we created several line staff committees where decisions can quickly move up the chain of command to accomplish tasks much faster. Some of the District’s internal committees include: operations committee, technology committee, public relations / information (PIO) committee to name a few. These committees not only improve communications but ultimately improve the level of service the District provides to the communities the District serves.

Here is a summary of some of our 2017 accomplishments:

These are just some of the highlights and achievements the District accomplished in 2017 and we look forward to improving the District in 2018. In 2018, we have many initiatives on our plate which include potentially moving to a five-member elected fire  board, developing a strategic plan to increase service levels, and improving the District’s infrastructure so we can build upon it when / if additional revenue becomes available.

As a District, we are always seeking public comments and participation. I encourage and recommend that all ECCFPD’s citizens and business owners become engaged with and learn about ECCFPD’s current service level restrictions and organizational challenges. This can be accomplished by becoming familiar with ECCFPD’s: website, Master Plan, social media channels and attending District meetings.

I look forward to a productive 2018 and continuing to push this District forward towards a higher level of service.

ABOUT THE EAST CONTRA COSTA FIRE PROTECTION DISTRICT:
The East Contra Costa Fire Protection District is a rural-funded fire district that protects approximately 249 square miles and over 114,000 residents. The District provides firefighting personnel and emergency medical services (basic life support) to the residents and businesses of the Cities of Brentwood and Oakley, the Township of Discovery Bay, and the communities of Bethel Island, Knightsen, Byron, Marsh Creek, and Morgan Territory.

As of July 1, 2017, ECCFPD has three (3) fire stations staffed by three (3) firefighters, for total district staffing of nine (9) firefighters per day. The district responds to over 6,900 calls a year that depend on approximately 9,000 fire engine responses. ECCFPD’s Master Plan calls for nine (9) stations to adequately provide coverage to the District’s citizens and businesses.

You can visit us on the Districts website, www.eccfpd.org  or through our social media pages on Facebook (East Contra Costa Fire Protection District), Instagram (@east_contra_costa_fire) , Twitter ( @ECCFPD ), Nextdoor and our YouTube channel (East Contra Costa Fire Protection District) for more information on the Fire District.

Great Job Helmick. With an elected fire board I see light at the end of the tunnel. You are an asset to East County.
Wish you well on your challenges ahead.

I am very excited about the district hiring a legislative consultant to go to the state. Hopefully they can help bring your funding up to the same level as other departments in Contra Costa County. This is a great step in the right direction.

This shows the willingness to have government share in the inadequate funding of ECCFPD. Not just the over taxed, tax payer. If the consultant (lobbyists ) have some success I believe the tax payer will be more receptive to additional taxes for increased or upgraded services.

The heart wrenching part is that you have to use district funds for what our local politicians should have done for their constituents. It was a local problem that should have been fixed at a local level.

Either way I hope this works!! For you and your hard working firefighters. Most importantly the people they serve and protect get the service they pay for.