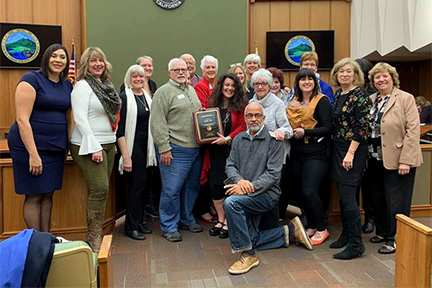 On Tuesday, Contra Costa County Board of Supervisor Karen Mitchoff announced that Debbie Toth, CEO of Choice in Aging, is the recipient of the 2018 Chair of the Board Award.

Mitchoff explained why Toth was selected where she highlighted how Choice in Aging promotes dignity and independence of people with disabilities and other needs. The organization has supported Contra Costa County and the greater Bay Area since 1949.

“She is an inspirational leader with a long history of accomplishments and it is my honor to recognize her for all she has done for others in our community and statewide,” stated Mitchoff. 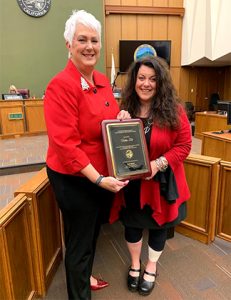 Choice in Aging serves more than 600 people each year through two adult day health programs and multipurpose senior service programs and California transition programs. The goal is to keep people in their homes and out of institutions while offering activities and social interactions during care for their health needs.

“Debbie is a very passionate advocate both locally, at the state level and federally,” said Mitchoff. “I think she attends more city council and board of supervisors meeting than any of us combined.”

Mitchoff highlighted how Toth educates policymakers on the outcomes and savings to taxpayers when people are given the care they need in community based settings versus institutionalizing our aging population.  She also takes on state lawmakers and challenges them to do the things they need to do to provide the funds to care for the aging population.

“In 2017, Toth realized her dream of adding intergenerational programing to Choice in Aging when Choice in Learning Montessori Preschool was integrated into the Pleasant Hill Campus,” said Mitchoff who further highlighted it was a way to serve the community. “This was an opportunity to create an intergenerational program where preschoolers can do activities with the aging participants at the Mt. Diablo Center.”

“Debbie is concerned and has been sounding the alarm that we need to be in a position to serve this need both locally and statewide because right now we are lacking the level of services to meet this need,” said Mitchoff.

Mitchoff further explained one of the reasons she selected Toth and Choice in Aging is she is working with transportation agencies to figure out solutions to meet the needs of the aging population with transportation services. Currently, to get from one part of the county, it could take as long as 4-hours with bus transfers and waiting. She said Toth and others are working to make transportation seamless for everyone. 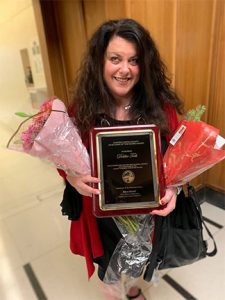 “I was extremely happy, pleased, proud, humbled to hear you rattle off the statistics that I say every time I get in front of a microphone because I think its important that we understand, you don’t need to love old people like I love old people, but we have a very large aging demographic  and if we don’t do something differently we are going to have a serious crisis with the aging population and the youth who are going to have to take care of them,” said Toth.

Toth stated there is an increase in the aging population, but a decrease in available caregivers so their needs to be a plan.

“One of the ways we are doing this at Choice in Aging, because I don’t think we can wait for our state and federal government policymakers, is to show how we can care for people in the community with dignity-based programing that cost less money to taxpayers while having greater outcomes,” explained Toth. “We are creating an Aging in Place campus that has accessible housing with the right kind of wrap around services from adult day care to complex case management to transportation to nutrition.”

Toth said they are going to endeavor to showcase their program can cost less money to have people living in that kind of environment than institutions.

“When people live in institutions, they don’t have a choice when they eat, what they eat, when they shower, when they go to the restroom, that is not right, it’s not dignified” stated Toth. “It should be a human right to be able to live independently in the community.”

Toth closed by saying she was very humbled by the recognition and was appreciative to be able to talk about Choice in Aging.