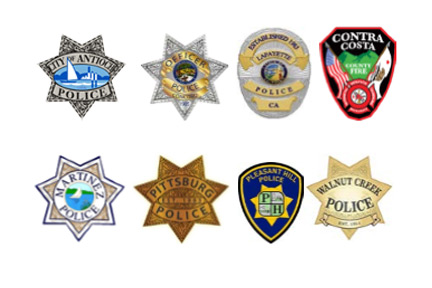 Fire and law enforcement leaders reminded residents and visitors that all fireworks, regardless of type or safety labeling, are illegal everywhere in the county.  There are no safe fireworks and, in addition to the potential for grievous bodily harm posed by these illegal devices, the risk of causing catastrophic wildfires during this time of extremely high fire danger is great.

Officials urged residents to leave fireworks displays to the professionals by instead choosing to visit one of the several officially-sanctioned displays planned around the county on the evening of the Fourth.

“The only safe and sane approach to fireworks in Contra Costa County is to simply not use them,” said Fire Chief Lewis Broschard, Contra Costa County Fire Protection District. “Not only are they uncontrollable and dangerous, they are also illegal, and their use poses the real possibility of causing catastrophic wildland fires in this time of critically high fire risk.”

“Depending on the type and amount of fireworks possessed, offenders could face fines of up to $5,000 and possible imprisonment,” said Chief Tammany Brooks, Antioch Police Department. “We encourage everyone to obey the law, not only for their safety, and the safety of everyone around them, but also to avoid the potentially negative life impacts a fireworks arrest can cause.”

“Please keep the victims of northern California’s recent fires in mind and refrain from using illegal fireworks that could easily cause devastating fires here,” said Lt. Sean Donnelly, Concord Police Department. “Instead, take your families to the many official fireworks demonstrations around the county and stay safe. The Concord Police Department wishes everyone a happy and safe Fourth of July!”

“Already several weeks into what promises to be a high-risk fire season, we want to remind residents of the very real dangers involved with illegal fireworks,” said Lafayette Police Chief Ben Alldritt. “We owe it to our friends, families, and neighbors to be safe and avoid fireworks risks this Fourth of July holiday — the City of Lafayette wants everyone to be safe and avoid fireworks-related accidents and fires.”

“While Independence Day is a time for celebrating, and we wish you all the best on this holiday, the Martinez Police Department remains steadfast in our commitment to public safety,” said Chief Manjit Sappal. “As such, we wish to make it clear that fireworks are illegal and unsafe; they can cause injury and devastating fire-related damage.  Please commit to the safety of your family, friends, and neighbors by not using any fireworks.”

“Let’s enjoy this Fourth of July with our friends and family without fear an illegal firework is going to hurt someone or start a fire,” said Chief Brian Addington, Pittsburg Police Department. “Pittsburg Police officers will be out in force this holiday rapidly responding to illegal fireworks calls.  We have adopted a zero-tolerance policy and will cite or arrest anyone in violation of the Fireworks Ordinance.”

“The pyrotechnic powder in most fireworks is extremely sensitive to heat, shock and friction, and in certain circumstance can explode even when you don’t want or expect them to,” said Sgt. Anthony Mangini, Walnut Creek Police Bomb Squad. “The fire and injury danger from illegal fireworks poses extreme risks for civilians, and also for first responders and our hazardous devices technicians who must dispose of them.” Fire and law officials urge residents to protect their homes, families and neighborhoods by reporting all use of illegal fireworks immediately to their local law enforcement.  In addition to fire danger, there are significant risks of serious injury or death.

Last year, an Antioch resident was severely injured handling a supposedly ‘safe and sane’ firework on the day after Independence Day. Nationwide, thousands of people are injured each year by fireworks, with more than half of these victims being under the age of 15.

For more information on protecting homes and businesses from wildfires in Contra Costa County, visit www.cccfpd.org/exterior-hazards.php .