This would be the first increase since 2006 and the last increase occurred in July of 2007 when they received a 2% cost of living adjustment (COLA).  Between July 1, 2009 through July 31, 2013, the Supervisors took a wage reduction to go along with a majority of County Employees.

According to the agenda item, the Contra Costa County Supervisors are currently the lowest in the State for Urban Counties, and second lowest for counties in the Bay Area (see chart above).  The counties of Alameda, Marin, Napa, San Francisco, San Mateo, Santa Clara, Solano, and Sonoma were used in the salary study.

Including benefits, the this action if approved would have a total annual additional cost of $235,000, $66,876 of which is pension cost.

Below is the information provided in the staff reports including the Ordinance. 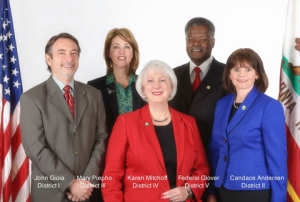 INTRODUCE Ordinance No. 2014-10 amending the County Ordinance Code to adjust salary of members of the Board of Supervisors and provide that such salary shall equate to seventy percent of the salary of California Superior Court judges.

In Contra Costa County, Supervisors’ salaries are set by ordinance. The last time Supervisors adjusted their salaries was in 2006, and the last increase was July 1, 2007, when they received a 2% cost of living adjustment (COLA). The Supervisors also took wage reductions from July 1, 2009, through July 31, 2013, along with a majority of our County employees. As a result of this, Contra Costa County Supervisors’ salaries are now the lowest in the State for Urban Counties, and the second lowest for counties in the Bay Area.

On October 21, 2014, the County Administrator reported that because the Board has recently made adjustments for the Contra Costa County elected department heads, it might be an appropriate time to consider also adjusting the Supervisors’ salaries which have not been increased for a number of years. In the Bay Area, Contra Costa County Supervisors’ salaries are near the bottom, with only Solano and Napa slightly higher or lower and those two counties have less than half the population of Contra Costa County. Additionally, many of the Bay Area counties tie the Supervisors’ salaries to a percentage of the Superior Court judge’s salary, with the percentage ranging between 47% and 80%. Board members considered the information provided, heard public testimony, and requested that an ordinance be prepared using 70% of Superior Court judges’ salaries. Additionally, the Board requested information be provided regarding other department heads’ salaries. The table below, sorted by annual salary, lists each department head classification and identifies elected department heads with an asterisk.

CONSEQUENCE OF NEGATIVE ACTION:
New ordinance will not be introduced.

The Contra Costa County Board of Supervisors ordains as follows (omitting the parenthetical footnotes from the official text of the enacted or amended provisions of the County Ordinance Code):

SECTION I. SUMMARY. This ordinance amends Section 24-26.006 of the County Ordinance Code to modify salary provisions for members of the Board of Supervisors.

SECTION II. Section 24-26.006 of the County Ordinance Code is amended to read: 24-26.006 Supervisors. (a) Each supervisor, for service as such, shall receive a base monthly salary at the following monthly rates as specified in the Contra Costa County pay series schedule:

(1) Effective January 5, 2015, a monthly salary of $ 10,768.92, which is determined to be equivalent to seventy percent (70%) of the monthly salary prescribed by State law for California Superior Court judges. Thereafter, the base salary of each supervisor shall be increased at such times and in such percentages as increases granted by law to California Superior Court judges, to maintain a base salary equivalent to seventy percent (70%) of the judges’ salary.

(b) Additionally, each supervisor shall receive reimbursement for reasonable expenses necessarily incurred in the conduct of such office; such other benefits as are provided other classified or exempt management employees; eligibility for an eighty-five dollar monthly county contribution to the county’s deferred compensation plan in the same manner as other management employees; and an automobile allowance of six hundred dollars per month, plus all mileage, at the rate per mile allowed by the Internal Revenue Services as a deductible expense. Receipt of the automobile allowance requires that a private automobile be furnished for county business.