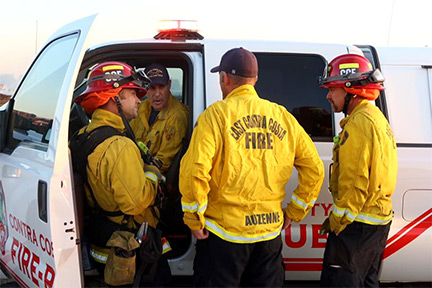 The following was a release by Contra Costa County Fire Protection District regarding the events of Oct. 26-27.

CONCORD, CALIF. – In an unprecedented 18-hour period on Oct. 26 and 27 marked by historically high winds and other Red Flag fire weather conditions, firefighters from across Contra Costa County and beyond were dispatched to respond to a near-continuous series of a two-alarm structure fire, eight grass and vegetation fires from east-to-west and back to central-county, and a mass casualty event. Each of these incidents presented exceptional danger to property and residents in its path; combined they represented a massive county-wide threat.

The eight major fires began just before midnight, Saturday, Oct. 26, and continued through 6 p.m. on Oct. 27. County firefighters, with support from out-of-county jurisdictions, fought one after another fires, sometimes concurrently and with more than 160 firefighters on the largest. Each of these fires could have resulted in massive devastation to large parts of the county. Suppression, and extended mop up efforts to preclude reignitions varied from nine-to-18 hours.

“We faced an historic and massive challenge October 27, the likes of which we have not encountered before and one that could have turned out much differently in loss of property and even life,” said Fire Chief Lewis T. Broschard III, Contra Costa County Fire Protection District. “Considerable planning, both in the prepositioning of fire resources well ahead of the predicted fire weather, and operational planning in its early hours and throughout the day, allowed us to deliver the resources needed to make rapid and overwhelming responses, limiting damage in what could’ve been a series of catastrophic, county-wide events.”

Beginning at 11:45 p.m., Oct. 26, firefighters were dispatched to a two-alarm commercial  structure fire in Walnut Creek that, because of developing high winds threatened to spread to adjacent structures.

Soon thereafter, at 3:09 a.m., Oct. 27, firefighters responded to the Santiago Fire on Bethel Island in eastern Contra Costa County. Next, a rapid succession of three additional east county fires – the Knightsen and Cypress fires at 5:14 and 5:36 a.m. in Oakley, and the Leon Fire in Clayton at 6:40 a.m. – broke out.

Still mopping up these fires in east county to ensure no reignitions in the high wind conditions, a fifth fire at the opposite reaches of the county, the Sky Fire, erupted at 9:39 a.m. in Crockett.

Soon thereafter, a rapid succession of three fires erupted in central county – the Pleasant Fires – North and South, at 1:20 and 1:23 p.m. in Lafayette, and the Forest Fire at 3:51 p.m. in Martinez.

“I would like to commend all of our personnel, our allied fire agencies, our police agencies, and the cities of Oakley and Brentwood and Contra Costa County, that came together to fight these fires, protected our communities, and helped to restore normalcy after this unprecedented weather event with recorded wind gusts up to 75 mph.” said Fire Chief Brian Helmick, East Contra Costa Fire Protection District.

In all of these fires, despite threats to numerous homes and other buildings, structure-protection firefighting efforts limited damage to a single gas station in the Santiago Fire and a two-story commercial building and two outbuildings, which were destroyed, in the Pleasant Fire – South. One residence also suffered minor damage in this latter fire. One CAL FIRE firefighter sustained minor injuries during the day; there were no other injuries reported to firefighters or civilians.

“This incident points up the great risk our community faced that Sunday from spot fires caused by embers from some 6,000 feet away; had they fallen in our town, the outcome might have been much different,” said Fire Chief Dean Colombo, Crockett-Carquinez Fire Department. “Our town weathered this major threat in large part because of the organization of equipment and crews by the individual fire departments, which was orchestrated by our Operational Area leadership at the county and supplemented to a major degree by CAL FIRE. Had we not had this preparation, we would be looking back today at a disaster on Oct. 27th.”

In addition to the numerous and significant fire events, Con Fire dispatched to a Multi Casualty Incident in Martinez beginning at 10:17 a.m. resulting from a fallen tree at the Sunday Farmers Market at Main and Castro Streets. A total of 14 units responded to this incident including four fire and rescue apparatus and seven ambulances encompassing some 30 firefighters, paramedics and support personnel.

An early morning decision to hold all Con Fire firefighters scheduled to go off shift that morning was fully supported by both firefighters and labor — Local 1230, United Professional Firefighters of Contra Costa County. This resulted in, essentially, a second district’s worth of firefighters – another nearly 100 firefighters – to supplement and staff some additional 20 fire apparatus. Other jurisdictions around the county made similar decisions to hold on duty their off-going firefighters.

As a result of holding off-going personnel at their stations, and later recalling firefighters and support personnel from the remaining, third shift, Con Fire alone was able to staff, in addition to existing normal staffing, a total of six fire engines, 15 wildland fire engines, two auxiliary support units, 14 command personnel, and five support personnel. To support these additional firefighters, every available apparatus in the District, including spare units and training engines, was pressed into service.

CAL FIRE provided multiple responses and additional resources, including critically important air tankers, on many of the fires despite being seriously drawn down because of incidents across the state. The 6:40 a.m. Leon Fire was managed by CAL FIRE and East Contra Costa Fire with support from multiple county agencies, including Con Fire and Task Force 2026.

All the major fire events included significant evacuations, which were supported, and largely conducted by a combination of the Contra Costa Sheriff’s office and local law enforcement.  More than 7,000 residents were evacuated on Oct. 27 across the county, and more were ordered to prepare for possible evacuations.

“Evacuations of some 2,400 residents were successfully completed in Lafayette by a combination of police and fire efforts working in unified command and supported by the fact that many of our residents were prepared, having signed up for both the county Community Warning System and our city’s Nixle notifications,” said Lafayette Police Chief Ben Alldritt. “We were also supported by neighboring law enforcement agencies including the East Bay Regional Parks, Walnut Creek and Danville police departments, and deputies from the Contra Costa County Sheriff’s Office.”

Punishing winds, beginning in the early morning hours and building through the afternoon resulted in severely difficult firefighting conditions and contributed to the rapid and initially uncontrolled spread of each of these eight fires. At their peak, in early afternoon during fighting of the Sky fire, wind gusts were reported as high as 75 mph.

Contra Costa County Fire Protection District (Con Fire) — a recognized fire service leader — provides fire and emergency medical services to more than a million people across its 304 square-mile District area, and through mutual aid, in and around the 20 cities and unincorporated communities of Contra Costa County, California. With few exceptions, county emergency ambulance transport services are provided by Con Fire through its unique sub-contractor Alliance model. In 2018, the District responded to nearly 75,000 fire and EMS emergencies and dispatched some 95,000 ambulances, providing expert medical care on more than 74,000 ambulance transports. The District, with 26 fire stations and more than 400 employees, is dedicated to preserving life, property and the environment.

The Crockett-Carquinez Fire Department is an approximately 50 person strong force serving and protecting the communities of Crockett, including Valona and Selby, and Port Costa.