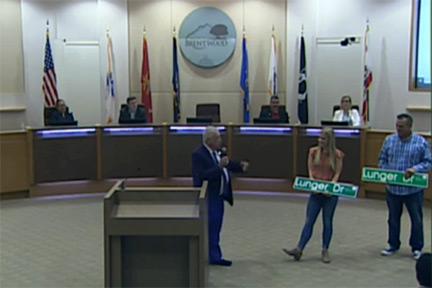 The move came after Sgt. Scott Lunger, a Hayward Police officer and City of Brentwood resident, was killed in the line of duty during a traffic stop on July 22, 2015. He served 15-years with the department.

Brentwood staff said Tuesday they wanted to honor him and have his name be in the community forever to honor his sacrifice and his family’s sacrifice during the presentation of street signs to Sgt. Lungers family.

Mayor Bob Taylor called Lunger an amazing man who projected himself into the community.

“He gave the color blue credence,” said Taylor. “His name will forever be entrenched in our city.”

Back in 2018, a portion of State Route 4 was named for Sgt. Lunger between Laurel Road in Oakley and Balfour Road in Brentwood.