At 4:52 am Monday, East Contra Costa Fire Protection District firefighters responded to a report of a residential structure fire in the 1800 block of Sunset Road near N. Eden Plains Road in the City of Brentwood.

The original report was a chimney fire with possible flames.

Upon arrival, Engine 52 located a working chimney fire that had extended into the attic and called it a working fire. Shortly after additional crews began arriving on scene, Battalion Chief 5 stated the flames began shooting through the roof.

It took firefighters nearly 30-minutes to get control of the fire before knocking it down in the pouring rain. 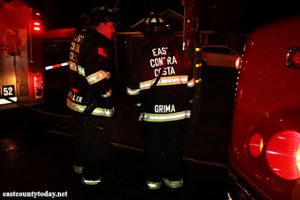 According to Battalion Chief 5, the homeowners did have the chimney cleaned last year and the cause of the fire was still under investigation.

The amount of damage is unclear as it appeared firefighters limited damage to the attic and roof areas of the home with some smoke damage inside the home. No injuries were reported.

Thank you to all the firefighters who work day and night rain or shine to keep us safe. We will never need to fear, 52 will be right here.