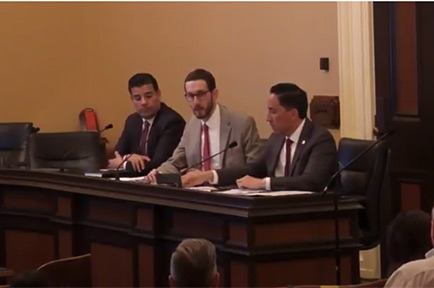 On Thursday, the LGBT Caucus held a briefing on the decriminalizing HIV and SB 239 introduced by State Senator Scott Wiener (D-San Francisco).

The controversial bill, Senate Bill 239, introduced in early February, would repeal laws passed more than three-decades ago that Wiener and supporters say are discriminatory and not based in science. The proposed bill would treat HIV like other communicable diseases under California Law.

According to the proposed bill, it would make it a misdemeanor instead of a felony to intentionally expose someone to HIV.

Here is a look at the LGBT Caucus Briefing held on March 8.


Here is a look at the Legislative Digest regarding the bill:

SB 239, as introduced, Wiener. Infectious and communicable diseases: HIV and AIDS:criminal penalties.
(1) Existing law makes it a felony punishable by imprisonment for 3, 5, or 8 years in the state prison to expose another person to the human immunodeficiency virus (HIV) by engaging in unprotected sexual activity when the infected person knows at the time of the unprotected sex that he or she is infected with HIV, has not disclosed his or her HIV-positive status, and acts with the specific intent to infect the other person with HIV. Existing law makes it a felony punishable by imprisonment for 2, 4, or 6 years for any person to donate blood, body organs or other tissue, or, under specified circumstances, semen or breast milk, if the person knows that he or she has acquired immunodeficiency syndrome (AIDS), or that he or she has tested reactive to HIV. Existing law provides that a person who is afflicted with a contagious, infectious, or communicable disease who willfully exposes himself or herself to another person, or any person who willfully exposes another person afflicted with the disease to someone else, is guilty of a misdemeanor.
This bill would repeal those provisions. The bill would instead make the intentional transmission of an infectious or communicable disease, as defined, a misdemeanor, if certain circumstances apply, including that the defendant knows he or she is afflicted with the disease, that the defendant acts with the specific intent to transmit the disease to another person, that the defendant engages in conduct that poses a substantial risk of transmission, as defined, and that the defendant transmits the disease to the other person. The bill would impose various requirements upon the court in order to prevent the public disclosure of the identifying characteristics, as defined, of the complainant and the defendant. By creating a new crime, the bill would impose a state-mandated local program.
(2) Under existing law, if a defendant has been previously convicted of prostitution or of another specified sexual offense, and in connection with the conviction a blood test was administered, as specified, with positive test results for AIDS, of which the defendant was informed, the previous conviction and positive blood test results are to be charged in any subsequent accusatory pleading charging a violation of prostitution. Existing law makes defendant guilty of a felony if the previous conviction and informed test results are found to be true by the trier of fact or are admitted by the defendant.
This bill would delete that provision. The bill would also vacate any conviction, dismiss any charge, and legally deem that an arrest under the deleted provision never occurred. The bill would require any court or agency having custody or control of records pertaining to the arrest, charge, or conviction of a person for a violation of the deleted provision to destroy, as specified, those records by June 30, 2018. By imposing this duty on local agencies, the bill would impose a state-mandated local program. The bill would also authorize a person serving a sentence as a result of a violation of the deleted provision to petition for a recall or dismissal of sentence before the trial court that entered the judgment of conviction in his or her case. The bill would require a court to vacate the conviction and resentence the person to any remaining counts while giving credit for any time already served.
(3) Existing law requires the court to order a defendant convicted for a violation of soliciting or engaging in prostitution for the first time to complete instruction in the causes and consequences of acquired immunodeficiency syndrome (AIDS) and to submit to testing for AIDS. Existing law requires such a defendant, as a condition of either probation or participating in a drug diversion program, to participate in an AIDS education program, as specified.
This bill would repeal those provisions.
(4) The bill would also make other conforming changes.
(5) The California Constitution requires the state to reimburse local agencies and school districts for certain costs mandated by the state. Statutory provisions establish procedures for making that reimbursement.
This bill would provide that with regard to certain mandates no reimbursement is required by this act for a specified reason.
With regard to any other mandates, this bill would provide that, if the Commission on State Mandates determines that the bill contains costs so mandated by the state, reimbursement for those costs shall be made pursuant to the statutory provisions noted above.

Equality California, Positive Women’s Network – USA, ACLU and others join in support of bill to reform outdated laws enacted during a time of fear and ignorance to make them more consistent with laws involving other serious communicable diseases
February 6, 2017

Today, Senator Scott Wiener (D-San Francisco) and Assemblymember Todd Gloria (D-San Diego) introduced a bill to modernize laws that criminalize and stigmatize people living with HIV. Assemblymember David Chiu (D-San Francisco) is also a co-author of the bill. Senate Bill 239 would amend California’s HIV criminalization laws, enacted in the 1980s and ‘90s at a time of fear and ignorance about HIV and its transmission, to make them consistent with laws involving other serious communicable diseases.

“These laws are discriminatory, not based in science, and detrimental to our HIV prevention goals,” said Senator Wiener. “They need to be repealed. During the 1980s — the same period when some proposed quarantining people with HIV — California passed these discriminatory criminal laws and singled out people with HIV for harsher punishment than people with other communicable diseases. It’s time to move beyond stigmatizing, shaming, and fearing people who are living with HIV. It’s time to repeal these laws, use science-based approaches to reduce HIV transmission (instead of fear-based approaches), and stop discriminating against our HIV-positive neighbors.”

SB 239 updates California criminal law to approach transmission of HIV in the same way as transmission of other serious communicable diseases. It also brings California statutes up to date with the current understanding of HIV prevention, treatment and transmission. Specifically, it eliminates several HIV-specific criminal laws that impose harsh and draconian penalties, including for activities that do not risk exposure or transmission of HIV. It would make HIV subject to the laws that apply to other serious communicable diseases, thereby removing discrimination and stigma for people living with HIV, and maintaining public health.

“It’s time for California to reevaluate the way it thinks about HIV and to reduce the stigma associated with the disease,” said Assemblymember Gloria. “Current state law related to those living with HIV is unfair because it is based on the fear and ignorance of a bygone era. With this legislation, California takes an important step to update our laws to reflect the medical advances which no longer make a positive diagnosis equal to a death sentence.”

“As a former prosecutor, I know firsthand the need to get outdated and unscientific laws based on homophobia and fear off the books,” said Assemblymember Chiu. “These laws criminalize and stigmatize people with HIV, and they must be updated.”

Legislators passed a number of laws three decades ago, at the height of the HIV epidemic, that criminalized behaviors of people living with HIV or added HIV-related penalties to existing crimes. These laws were based on fear and on the limited medical understanding of the time.  When most of these laws were passed, there were no effective treatments for HIV and discrimination against people living with HIV was rampant.

In the decades since, societal and medical understanding of HIV has greatly improved. Effective treatments dramatically lengthen and improve the quality of life for people living with HIV—treatments that also nearly eliminate the possibility of transmission. In addition, similar treatments are available to HIV-negative people to nearly eliminate risk of infection. Laws criminalizing people with HIV do nothing to further public health and, in fact, stigmatize them, discouraging testing or obtaining necessary medical care.  The laws also reduce the likelihood of disclosure of a positive HIV status to sexual partners.

“These laws are disproportionately used against women and people of color, and fuel stigma, violence and discrimination,” said Naina Khanna, executive director of the Positive Women’s Network – USA.  “Despite their claims to protect vulnerable communities, these laws actually cause further harm, both to people living with HIV and the broader public.”

HIV criminalization disproportionately affects women and people of color. Forty-three percent of those criminalized under California’s HIV-specific criminal laws are women, despite comprising only 13 percent of people living with HIV in the state. Blacks and Latinos make up two-thirds of people who came into contact with the criminal justice system based on their HIV status, despite comprising only about half of people living with HIV/AIDS in California.

“These laws impose felony penalties and harsh prison sentences on people who have engaged in activities that do not risk transmission and do not endanger public health in any way,” said Rick Zbur, executive director of Equality California. “Modernizing them would reduce discrimination and stigma for people living with HIV. Ending stigma is at the core of ending HIV. Treatment of HIV has entered the 21st century – it’s time for California’s laws to reflect that, as well.”

“Living with HIV should not be a crime in California,” said Supervisor Jeff Sheehy, who is the first HIV positive member of the San Francisco Board of Supervisors and a leader in San Francisco’s Getting to Zero coalition to end all new HIV infections. “That’s why I support Senator Wiener’s legislation.”

Well that proves it. Weiner is a real Dick.

this is real important for you poor folk in Cali,isn’t it???you people are as stupid as the day is long.