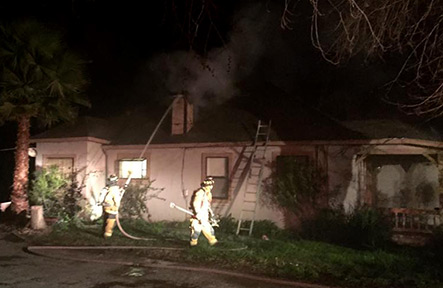 At 1:28 am Tuesday, the East Contra Costa Fire Protection District responded to a report of a residential structure fire in the 3000 block of Hosie Avenue in Byron.

According to the District, they arrived to the scene where they located smoke coming from the chimney of a single story home with the homeowner on the roof trying to extinguish the fire. Firefighters made entry to the home and realized there was a working attic fire.

Firefighters moved quickly to open up the walls and roof to extinguish the fire.

According to Battalion Chief Brian Helmick damages included the chimney and attic along with smoke damage throughout the home along with water damage in the living room.

Helmick stated the homeowner used his own ladder and was attempting to put out the fire with a garden hose. They had to get him down and get the residents out of the house as one of their first actions.

Helmick stated that was not a good decision because of how dangerous it could have ended.

“If your going to use a garden hose from the ground, sure, but once you are on the roof you cant observe if the fire is only in the chimney and its unknown if the fire has entered the attic and compromised the roof,” explained Helmick. “It goes along the lines of once you exit your house, you shouldn’t go back inside because you don’t know how the fire has grown or moved through he home.”

The cause of the fire was listed as chimney fire that extended to the attic. In total, damages were estimated at $75,000.

BART to Pay $1.275 Million Settlement in an Environmental Prosecution Case

A chimney fire is serious and sounds like a freight train coming through you house.

1. Have your chiminey cleaned/swept between 2 and 5 years a year. Most people never have it done.

Had our chimney swept last month. Our HOA requires chimney sweeps, vent cleaning, etc. I’m glad, because we’d probably never get around to having it done. It could prevent a fire.