At 3:05 pm Monday, the East Contra Costa Fire Protection District and CHP responded to a report of a vehicle stuck in a ditch with a victim trapped in the 5600 block of Chadbourne Road in the City of Brentwood.

While responding, it was reported that the vehicle was a US Postal Service Mail Delivery vehicle that was trapped along the side of the road. 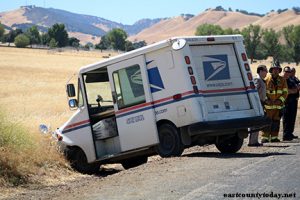 When firefighters arrived on scene, they located the victim inside the truck who was trapped after the door had been jammed shut due to the impact. The mail carrier sustained only a leg injury in the crash.

According to ECCFPD, the mailman swerved into the ditch while trying to avoid a rabbit in the roadway. We were told the rabbit was successfully avoided.

No further information was available and CHP was on scene investigating.

City of Brentwood Now Accepting Applications for the...

Brentwood: Man Airlifted After Being Stabbed at Park...

Brentwood to Host Virtual Public Workshop for the...

Such a sour little guy.

I call bullsh it on the rabbit story, bet you this idiot was texting and lost control. They need to have their phone investigated.

Agree. I remember in driving school someone asked about this and it was said to NO AVOID the animal and to run it over instead of causing an accident. Investigation is needed.