Littering has been and continues to be an ongoing, persistent, societal problem in many areas of East Contra Costa County, including the City of Brentwood. However, in spite of numerous complaints from caring citizens, articles, signage, and repeated attempts to educate the public pertaining to the prevalent nature and seriousness of littering and unauthorized dumping, it appears to be a problem that is not disappearing anytime soon.

“I drive on Deer Valley Road six times a week,” said one angered resident, who regularly commutes to work from Brentwood. “People dump mattresses, couches, washing machines, furniture, whole living room sets, and bags of who-knows-what out there. I wish they can figure out a way to take care of it or figure out who is responsible. It’s a disgrace!”

Another Brentwood resident, Cristina Zanarini, added, “I think the primary issue lies in the dumping on the back roads of Brentwood. People often dump garbage on the side of the roads on the outskirts of town. I can imagine that some of this dumping is done by people that don’t live in Brentwood.”

According to adoptahighway.net , the cost of litter cleanup in the United States is pretty significant; approximately $11.5 billion annually. Businesses account for roughly 80% of the cost, with the remaining 20% paid for by local and state governments, schools, and other organizations. Drivers are said to be responsible for approximately 52% of roadside litter, with pedestrians and improperly covered trucks contributing 23% and 16%, respectively. Cigarette butts and tobacco products contribute nearly 40% of all litter, followed by paper and plastic products.

“We still continue to deal with large amounts of trash and debris associated with homeless encampment,” said Brentwood Police Lieutenant Walter O’Grodnick. “Fortunately, we haven’t experienced a whole lot with appliances, but do stumble across furniture occasionally.”

Since October of last year, the City of Brentwood has received approximately 50 littering complaints, resulting in five citations being issued and three crime reports being initiated. Fines for littering and illegal dumping range anywhere from $100 to $1,000 depending on the severity of offense, which could entail simple littering or disposal of hazardous waste. 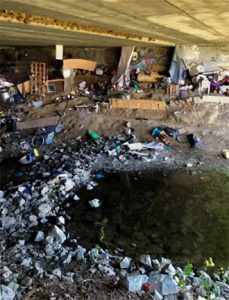 In fact, back in May of this year, the city spend several days cleaning up an encampment under the overpass at Sand Creek Rd. and O’Hara Ave. City staff and officers facilitated the cleanup of the encampment, which included the disposal of hazardous materials, waste and drug paraphernalia.

As a result, Brentwood patrol staff remain proactive when policing communities and watch for unusual activity in areas known for littering. If a littering situation arises, a citation is then issued and a cleanup will be enforced.

“I discovered a queen-size box spring and mattress abandoned in the middle of the street at the far east end of Sand Creek Road east of Garin Parkway,” added O’Grodnick. “Although it was a dead end-perhaps the reason it was dumped there, it was a roadway hazard. Our Public Works team responded and removed it from the roadway. This clearly tied up resources.”

While local disposal facilities are open year-round and accept most types of household waste, for some reason, it doesn’t seem to be enough to entice some citizens to dispose of their waste legally as opposed to dumping garbage or unwanted goods in a vacant lot or on the side of a road, perhaps due to cost.

Illegal dumping and littering eventually ends up costing the city, however. During the 2017/2018 fiscal year, the City of Brentwood spent approximately $25,000 on graffiti abatement, and another $30,000 on illegal dumping.

“The nearest disposal facilities are located in Livermore and Pittsburg,” said O’Grodnick. “It is suspected that one reason many people illegally dump on streets, vacant lots, or open spaces could be peoples’ unwillingness to make the trip to public solid waste disposal sites.”

If anyone witnesses an alleged act of littering or illegal dumping, residents are encouraged to contact the 24-hour Dispatch Center at 925-809-7911. If it involves a vehicle, the reporting parties (without compromising their own safety) are advised to provide a location, a vehicle and suspect description, and license plate number.

“The City of Brentwood offers four free disposal days a year to help our residents,” added O’Grodnick. “Our residents are encouraged to take advantage of these opportunities. It’s only available to Brentwood residents and you have to pre-register before the event.”

Further information on the City of Brentwood’s garbage and recycling program, as well as information regarding Brentwood’s neighborhood cleanup events, can be found at the following link: https://www.brentwoodca.gov/gov/pw/recycling/default.asp

Sean Tongson, writer, is a resident of East Contra Costa County, a proud husband and father, and enjoys outdoor activities such as hiking, road tripping, and traveling.

I spend over 30k a year on removing trash others dump on my property. Dumping is a huge issue…

Taking stuff to the dumps is expensive so it is cheaper and easier to toss it on the side of the road. In Antioch bags and bags of stuff are dumped on my street daily. All over town people dump truck loads of trash in front of peoples houses. Trash out of cars is all over every parking lot. Until people care and have self respect nothing will change. Antioch is doing a much better job but it is expensive.

Those same people would dump it on the side of the road if it was free. They don’t care. They’re too lazy and cheap to take it to the dump, and they have no respect for others. When we lived in Southern CA the dump didn’t charge, and illegal dumping was still a problem – but nothing like Antioch. It was a nicer town. “Too expensive” is an EXCUSE for irresponsibility.

This same problem is even worse on Vasco Road. I have begged Supervisor Burgis office for a year with no results. After sending mass emails to other agencies there now seems to be an attempt. We should not have to beg to keep our roadways clean.

If you are concerned about the trash on Vasco Rd leeching into the groundwater and wildlife food chain,
Call Supervisor Burgis now at 925-252-4500

This same problem is even worse on Vasco Road. I have begged Supervisor Burgis office for a year with no results. After sending mass emails to other agencies there now seems to be an attempt. We should not have to beg to keep our roadways clean.

If you are concerned about the trash on Vasco Rd leeching into the groundwater and wildlife food chain,
Call Supervisor Burgis now at 925-252-4500

No, you were in spam. I was golfing the mayors cup. Could not approve some comments until now.

Thanks, hope you did well in the tournament

Its all about taking pride in where u live ,whether you own your property or renting.Dont you want a BEAUTIFUL place to live, CLEAN environment for you and your family? So be responsible and a law abiding citizen and just do the right thing.It takes more effort to do a bad thing,driving and sneaking to dump your trash in some dark road.Even though no one saw you but God did.He gave us a BEAUTIFUL EARTH.as our home.Lets ALL do our best and keep it beautiful .