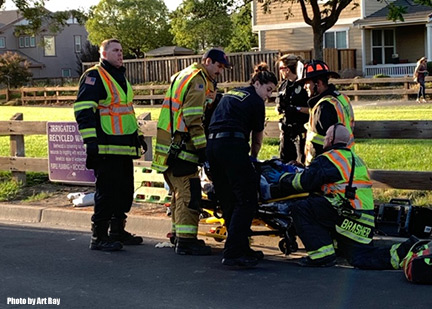 At 7:05 am Thursday, the East Contra Costa Fire Protection District was dispatched to a report of a vehicle vs. pedestrian at Trailside Drive and Sunset Road in the City of Brentwood.

While responding, it was reported the pedestrian was a child who sustained a head injury. A medical helicopter was then requested.

By 7:15 am, Engine 53 reported the child was an 12-year-old female suffering from a head trauma.  The helicopter was landing at Sunset Park.

According to preliminary information, this was a hit and run crash. If you were a witness or have any information please contact Brentwood Police at (925) 809-7920.

UPDATE
According to police, a 53-year-old female suspect was arrested for felony hit and run as well as for driving under the influence after an officer located her sitting in the involved GMC suburban in the parking lot within the 2100 block of Elkins Way. She was later transported and booked into the Martinez Detention Facility.

Brentwood Seeks Residents to Serve on Commissions and Committees

Brentwood: Motorcyclist Airlifted to Local Hospital After Crash on Balfour