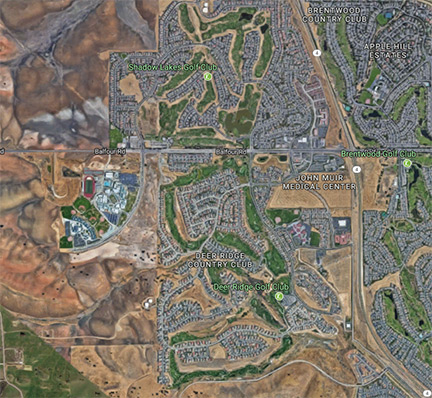 On Tuesday night, the Brentwood City Council voted unanimously in a 5-0 vote to move forward with contracting out services for an Environmental Impact Report (EIR) relating to the Deer Ridge and Shadow Lakes golf course development.

The cost for Kimley-Horn and Associates, Inc. to prepare the project-level EIR for this application is $236,875.00.

Under the plan, Senior Living facilities would be built on the property currently occupied by the Deer Ridge clubhouse and parking lot and portions of the Shadow Lakes Golf course. SunCoast Properties would then consolidate the two 18-hole golf courses (36-holes) and turn it into an 18-hole course with a mixture of holes from both golf courses and the building of a bridge over Balfour Road.

SunCoast Properties, who has had a dozen meetings with residents, claims maintaining both golf courses is not sustainable and has a $10 million debt.

On Tuesday night, there were 4 speakers in favor of moving forward with the EIR citing reasons that they wanted to see what it had to say. 3 speakers were neither in favor nor against, but wanted to wait until after the EIR to determine their opinion. While 21-speakers opposed the EIR/Re-zoning.

Here is a sampling of the comments made regarding the EIR and re-zoning:

Vice Mayor Steve Barr thanked the community who spoke Tuesday and said all of the concerns will be addressed at the appropriate time but that he was supporting the EIR. He encouraged the community to continue to participate in the discussion because it provides the council with valuable input.

“This is part of the process what we are going through and is the first step,” said Barr. “I know we have heard a lot from residents over the past couple months and I appreciate that. When the time is appropriate for talking about all those topics we will. But tonight we are talking about an EIR and a consultant. I think this is where we start to flush out some of the challenges any type of development will face whether it’s where this is located or any other part of the city.”

Councilwoman Karen Rarey also thanked the community for coming out and speaking to the council on this topic.

“I have said this all along, I urge you to continue to be part of the process whether you are in support or opposition of it. To get what you will be happy with in the end you need to be a part of the process,” said Rarey. “Please continue to be in contact the community development department, check out the website, and submit your questions along the EIR. It’s very important you provide us with your comments and come to the following meetings.”

Councilwoman Claudette Staton thanked the community for their comments because she said she needed to hear them and said she wrote down as much as she could.

“At this point, I know that if the EIR is approved, it will be available to all of you to look at so please do participate because we need your help, it’s not just us making decisions about all of you, it’s your input as well which will help us make a decision,” said Staton. “Not wanting to be one of the ones who will put the city in litigation, I am definitely in favor in moving forward with the study.”

Councilman Joel Bryant said that is was not the community versus the council because they all live there highlighting he lives in Shadow Lakes.

“I appreciate the fact that in our country that we can express ourselves freely in this environment and that is why it works this way and I appreciate you taking the time to do it and don’t let this be the only time you do it, be actively involved in this decision making process,” said Bryant. “This EIR process is legally necessarily and part of the application process and isn’t just this, anyone that comes in with an application on this scale, the state demands that we do an EIR. We can either do it or let the applicant pay for it or not do it and be taken to court and us pay our tax money to pay for it and their legal fees. The EIR will be done, we can let them pay… the fact is the EIR has to be done so I am in favor of moving forward and getting it done when it doesn’t cost us anything.”

Mayor Bob Taylor appreciated all the comments and care about what is going to happen and the future.

“The EIR is going to answer a lot of questions, but also raise a lot of questions. We are all going to have to be specific and be on tone,” said Taylor. “Remember that we are not going to get anything back until March, we all need to be on the ready zone, when it does come down we need to know where we are at.”

With the vote, the EIR will become available in March 2018.

According to the City, an environmental review of the project is required by State law and the failure to conduct an adequate environmental review will likely subject the City to litigation. Approval of the agreement in no way signifies City support of, or opposition to, the underlying project, and is only the first step in the required project review process. The public will have an extended period of time to provide written comments on a draft of the environmental documentation once it is prepared.

The public will also have multiple opportunities throughout the application review process to provide written comments on the project to the City, as well as to provide verbal comments to the Planning Commission and/or City Council at their respective meetings. The review process will conclude with formal public hearings on the project and environmental documents to be conducted by the Planning Commission and City Council. It is anticipated that these hearings will occur in the spring of 2018.

The 18-hole golf courses at Deer Ridge and Shadow Lakes, built in the early 2000’s under separate ownership, are located in the southwest corner of Brentwood. Each course is surrounded by a significant number of single-family homes, with 1,031 in Deer Ridge (located south of Balfour Road) and 940 in Shadow Lakes (located north of Balfour Road). In 2006, SunCoast Properties bought both courses.

Earlier this year, SunCoast approached the City about the possibility of consolidating the two courses (reducing the 36 existing holes to a total of 18, with approximately half of the holes in Deer Ridge and the other half in Shadow Lakes), repurposing the 18 holes to be removed from play, developing small portions of each course with senior housing projects, and building a golf cart bridge over Balfour Road to connect the reconfigured course. SunCoast submitted a formal development application to the City on July 6, 2017 to move forward with its plan.

Before the project may be developed, the City would have to approve a series of discretionary land use entitlements, including:

This council is tone def. Its apparent to me that SunCoast Properties have been meeting with the city and the plan has been in the works for a while and hoodwinked residents. Sure, do the EIR by law, but this council should reject this proposal and not bail out Suncoast.

I think the Shadow Lake homeowners needs Legal Representation because they are being hoodwinked. I’m sick and tired of these city councils being completely irresponsible in their decisionmaking. Save what is left of Contra Costa County.