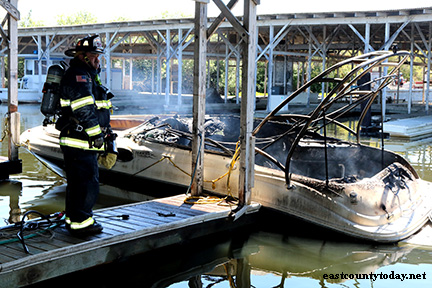 At 2:02 pm Wednesday, East Contra Costa Fire Protection District responded to a report of a boat on fire on Orwood Road at Cruiser Haven Marina.

While responding, it was being reported that bystanders in the area were pushing the boat out of the marina and into open water to prevent the docks and marina from catching fire. They were also attempting to put water on the boat. 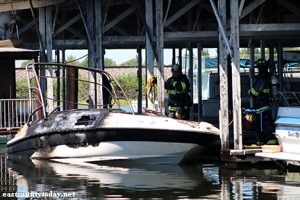 When fire crews arrived, several boats and the structure was threatened and air support was requested to make water drops. However, due to quick actions of firefighters, the fire was knocked down without incident and air aid was cancelled.

Three AMR units were requested to assist with the bystanders who helped keep the boat off the dock. A medical helicopter was requested to do to smoke inhalation burns, however later crews opted for ground transport.

Crews remained at scene once the fire was extinguished as the boat was taking on water and they were concerned with gasoline spilling into the delta and were working with outside agencies on handling the sinking boat and preventing gasoline leaking into he water.

It appeared the marina was not damaged in the incident.