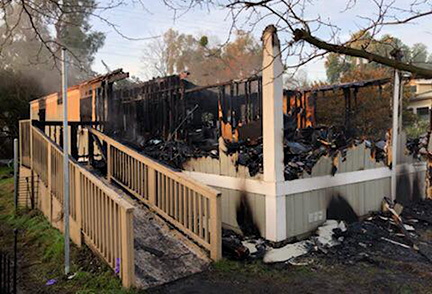 At 12:56 am Thursday, the East Contra Costa Fire Protection District responded to a report of a mobile home fire on Bethel Island in the 200 block of Fairway Drive.

At least five people were in the double-wide trailer at the time of the fire where four were able to escape.

According to Battalion Chief Craig Auzenne Engine 53 (Oakley) observed smoke and flames while responding from E Cypress Road and arrived on scene to most of the mobile home on fire. They made contact with the residents and were notified that a female was still inside.

Firefighters later located the female victim in a back bedroom. Along with the fatality, two other residents were injured and transported to a local hospital.

Firefighters did prevent neighboring structures from having any damage.

“The challenge was the water supply and making a true aggressive attack on a mobile home because of the collapse hazard,” said Auzenne. “Most importantly, on Bethel Island we always battling time and distance to ensure the fastest response possible.”

One Dead in Antioch Garage Fire

Tragedy, wasn’t Cypress Lakes supposed to supply Station and staffing of a Fire Station as part of their construction? The loss of life is not acceptable.

Taxpayer, the station is being built right now. It is at Cypress and Bethel Isl. The ECCFPD I was told loaned the money to Oakley for construction. When finished they will search a way to fund it. I suspect they will ask for a new tax again.

So, since the Cities and County want more houses and more tax dollars they don’t make new construction pay it’s own way with enough developer fees and benefit assessments to pay for personnel. The result, Fire District falls further behind and people die.
Let’s keep voting in leaders that don’t care

Was suppose to be built years ago. Still no funding for Fire fighters. This is not a movie ( Station of Dreams) build it and they will come! Lives are now being lost.