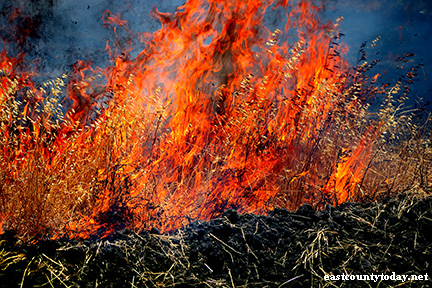 At 1:21 pm, Contra Costa County Fire Protection District firefighters were dispatched to a report of a vegetation fire in the 20 block of Mountain View Avenue off Willow Pass Road in Bay Point.

Upon arrival, Battalion Chief 2 stated structures were threatened and requested an alarm dispatched for structure protection on Mountain View Ave.

This fire came at the same time units were dispatched to a structure fire at USS-POSCO. While the second alarm was being dispatched, units became available at that incident to respond to the vegetation fire.

The fire was reportedly approaching apartments at 29 Willow Pass. Units were also sent to Bayview Ave and Loftus for reports of fires.

By 2:00 pm, firefighters reported knockdown of the fire in the canal area and were stopping forward progress on other parts of the fire while protecting property.

By 4:00 pm, the incident was broken down and all structures were protected.