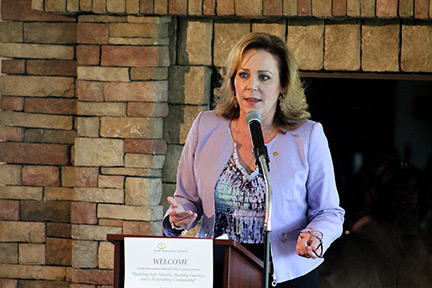 On Wednesday, the Antioch Unified School District approved a 1-year contract extension with Superintendent Stephanie Anello who decided to forego a pay increase.

The board approved the amendment to her contract in a 3-2 vote with Trustees Gary Hack, Diane Gibson-Gray and Walter Ruehlig supporting while Crystal Sawyer-White and Debra Vinson dissenting.

Anello, who was entitled to a step increase and 2.25% salary increase, decided to forego the salary increase of $5,965. The contract extension was decided over 6-closed session meetings as the Board discussed her performance review where dozens of public comments from staff and the community offered support for Anello.

When asked why she turned down the raise, Anello stated deep cuts were coming in the next few years.

“During the next three years, the District will be losing approximately $34 million in revenue due to the opening of three new charter schools. As a result, we will need to make difficult decisions about potential staffing reductions and cuts to programs that affect students,” said Anello. “Given that, I told the Board I did not wish to receive the 2.25% raise that other employees received this year.”

The Antioch Unified School District is the largest school district in East Contra Costa County with 25-schools and serves more than 17,000 students. It is also the second largest employer in the City of Antioch.

Anello will continue serving the District with a salary of $238,583 and will be with the District through 2020-21.

Not all board member agreed with the extension as Trustees Sawyer-White and Vison stated they believed the remaining two years were enough as they work through District issues.

Sawyer-White stated that she still had concerns over the contract saying it would run through 2020.

“It’s too far out, I am fine with Stephanie here for 2-years, but I think we have some issues to address with declining enrollment and we can’t blame the charter schools,” said Sawyer-White. “I will get the documents from Contra Costa County Education from parents who have decided to leave the district and the other issue is that we have to address the students we have here in retraining teachers and some of these bonuses could go towards raises to obtain the special education teacher.”

Sawyer-White was then corrected by staff saying they already have a signing bonus structure in place for special education teachers.

“It was a fine gesture,” said Ruehlig. “I’ve seen four superintendents and I have to say this is the best one I have worked with.”

Ruehlig explained a recent survey of 759 school districts showed the norm was a 3-year contract which he said was not unusual.

Vinson also stated she appreciated that Anello did not take the 2.25% increase but that given the economic uncertainties based on research she disagreed with Ruehlig stating 3-year contracts were not the norm.

“I’ve never heard of a superintendent waive a raise,” said Gibson-Gray who explained that every time someone gets a raise, everyone else wants a raise and it was endless raises based on salary surveys.  “At a time when we are facing declining enrollment, charter school challenges, budget issues, for her to forego 2.25% and if you look at it over 10-years, that is a substantial amount.”

When former superintendent Donald Gill resigned from the District in 2015, he was making an annual salary of nearly $250,000.

To view Wednesday nights discussion on this item, it begins at the 2-hour, 29-minute mark.

Oakley: Man Who Assaults Woman and Barricades Himself in Home Arrested

Superintendent Anello is a class act. This is a great move for AUSD!!

Stop lying about what charter schools are doing to the district. They are not responsible for the long standing run off of students. The inadequacy of the district is.

Thank you to Vinson and SawyerWhite for taking a stand against the contract extension. It is not warranted at all.

I agree 100%, enough of the excuses already! Time for action!

The superintendent of Byron union school district, Debbie Gold, should consider returning her $30,000 annual pay increase. Somehow the board approved the salary increase while she mismanaged school funds, created bogus school budgets among many many other things. BUSD’s reserves are gone and the state might have to come in. Make no mistake Debbie Gold is a crook.

Last nights meeting was really educational for me in watching Crystal Sawyer-White argue against employees getting a raise. She hasn’t got a clue. If she is really concerned about district finances, then maybe she can stop trying to scrape money away from the District for her own benefit such as travel budget, laptops, board chairs. She also suggested the school board give themselves a raise. If you add all that up, it is more than what any raise of the superintendent would be.

As for Debra Vinson, appears to me she speaks in a very condescending manner. She makes all these statements with no facts behind them. It’s always another district, the community has concerns, etc. But she never says who the other District is, provides an example of what another District is doing or shares who in the community has a concern. Very vague in her speaking. I call BS on what she is speaking about because there is no substance.

I can see why people are frustrated with her even without the censorship nonsense.

I don’t understand how a superintendent is going to bypass a raise and two trustees are going to vote no? Vote these bums out.

The board got it right this time! Stephanie Anello will continue to make a positive impact in her role as superintendent!

Speaking of charter schools…this fall we will be offering dual credit astronomy 10&11 at DVHS in conjunction with Los Medanos College. We don’t just have a picture of a rocket on a box…we use real rockets, space probes and telescopes. Counts as equivalent to chemistry for college a-g requirements and the credits are more widely accepted than AP. Come see our planetarium with many new shows this fall. DV ACE academy grads have gone on to Cal Tech, MIT, Princeton, Berkeley, Davis, and more. You already have a free STEAM school in your district. Vote with your feet! Questions welcome : [email protected]

What is a STEAM school Mr. Adkins?