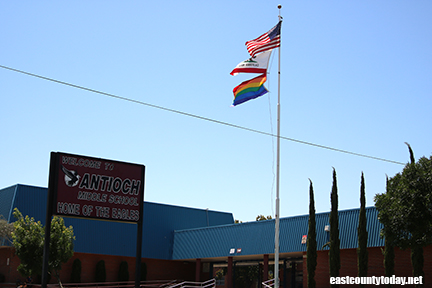 On Monday, Antioch Middle School became the first and only school in the Antioch Unified School District to raise the Rainbow Flag joining the District Office.

The move came after the Antioch School Board voted 3-2 on May 29 that recognizes June as LGBTQ Pride Month and flying the Rainbow Pride Flag.

During the month of June, the Antioch Unified School District urges all schools and individual citizens to participate in LGBTQ Pride Month and celebrate the identities and contributions of the Lesbian, Gay, Bisexual, Transgender, Queer/Questioning (LGBTQ) community.

According to Antioch Middle School Principal Lindsay Wisely, she explained the flag went up after the board direction and she stated that she wanted to create a welcoming environment for not only the students, but parents, staff and members of the community. 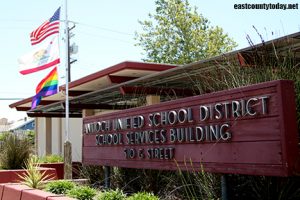 It was during the May 29 meeting where School Board Trustee Ellie Householder suggested that along with the proclamation, they fly the LGBTQ Pride Flag at the District office while encouraging other schools to also fly the flag.

“It may seem like a small thing raising a flag or having this resolution, but for students and young people who have been constantly been under attack for being who they are, this type of visibility does matter and could be the difference of a young person potentially committing suicide and them not committing suicide just by having their District and community stand behind them and recognize them saying we see you, we love you, we are with you and we stand with you,” stated Householder during the meeting.

The school district stated Monday that they were unaware of any other school in the District flying the flag other than Antioch Middle School.

Note: the US Flags to Half-Staff Honoring the victims of the tragedy in Virginia Beach, Virginia until sunset of June 4, 2019.