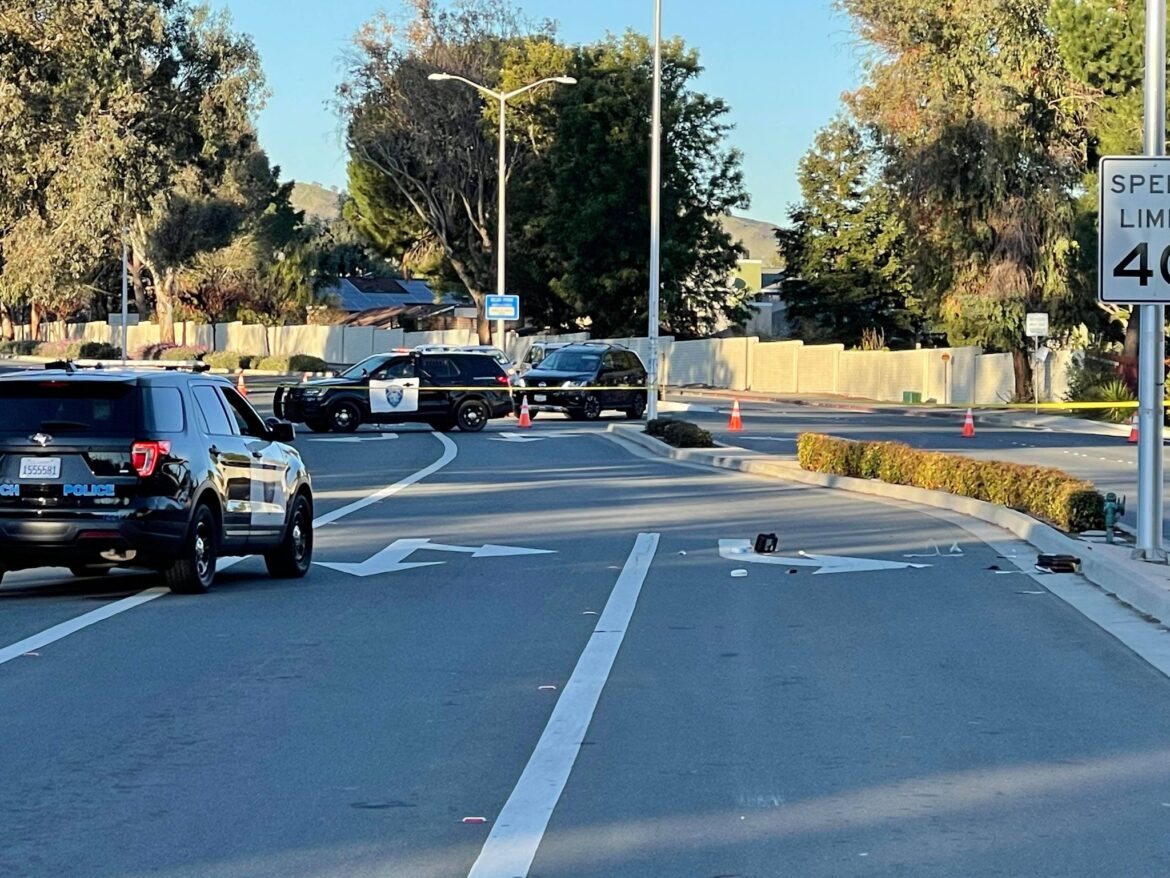 Thorpe kicked off the press conference thanking the Antioch Police Department for their efforts patrolling the streets and keeping the community safe and specially mentioned their efforts at the Target Shooting earlier in the afternoon.

He then went into the in-custody death that occurred just after midnight on James Donlon near Lone Tree Way.

“I was informed by the chief of police that an individual they were seeking to detain passed away. Although the facts are still being gathered per our procedures, the chief of police requested that the Contra Costa County District Attorney office lead all criminal investigatory efforts regarding this matter. In addition, a separate independent investigation is underway to determine if any of our policies were violated during this encounter,” stated Thorpe. “As mayor, I want to express my deepest condolences to the family of the deceased and pray that they have some level of comfort during this loss and extreme pain. I recognize they will not be able to achieve any comfort and peace until they have the answers that they need as it relates to their loved one. I want the residents to know that they will be provided answers because of the thorough investigation by the District Attorneys Office. Furthermore, in the event concludes that their was any negligence, we will seek the fullest effort to assure there is accountability.”

Thorpe stated as someone who served in the Navy, he has always had a respect for law enforcement and believed officers entered the profession to serve.

“We also cannot ignore the fact that there are critical reforms that are needed in the profession as a whole nationwide. For that reason, I am going to expedite the police reform measure that I talked about earlier this week, I will be calling for a special meeting this Friday at 5:00 pm where we will go through all those reforms to start deciding whether the council will move forward with those efforts,” stated Thorpe.

Chief Tammany Brooks highlighted the incident in question noting that officers received a call of a man rambling incoherently.

“During the course of the 9-1-1 call, another man could be heard with the man arguing over the possession of a phone. At one point during the call, there were sounds of a physical struggle. Around the same time, our dispatch center received a call that a Lyft driver activated a mobile alert needing police assistance with a subject who attempted to steal his cell phone and who had fled from his vehicle,” stated Brooks.

He highlighted two officers were sent to Lone Tree Way and Ridgerock Drive with very limited information after the man called a second time and gave his location.

“When officers arrived, the man (33 y/o Hispanic) appeared paranoid, yelling that they were not really police officers despite the fact that they were in fully marked APD police cars and in full uniform. The officers attempted to employ crisis negotiations tactics while attempting to deescalate the situation,” explained Brooks. “After a short time, the man ran into oncoming traffic onto Lone Tree Way. He attempted to enter a car that was stopped at a red light by pulling on door handle and pulling on the window yelling for the driver to let him inside. After nearly being struck by several vehicles, officers believed the man was putting himself, the public and officers in imminent danger and moved in in an effort to detain him.”

Brooks continued stating the man ran onto James Donlon Blvd where officers caught up with him where he lost his footing and fell onto the ground.

“A struggle ensued as officers tried to gain control of the man and get him out of the roadway as vehicles continued to pass by them. According to the officers, the man exhibited extraordinary strength and they were unable to gain control of his arms. A third officer arrived on scene and deployed his taser to allow them to overcome the mans resistance. Almost immediately after being able to get the man in handcuffs, he appeared to loose consciousness and the officers recognized this as a medical emergency,” stated Brooks.

“Based on the knowledge of facts based on the investigation thus far, I will share with you that no knee or other limb was ever applied to the mans neck during this incident, no use of pepper spray or impact weapons, no hand or leg strikes were used or the carotid restraint hold was never attempted,” stated Brooks further highlighted medical personnel arrived and took over care.

The man was taken to a local hospital where he was pronounced deceased.

“On behalf of the Antioch Police Department, I would like to convey my deepest sympathies to the mans friends and family,” stated Brooks.  “I can share with you that our officers are completely devastated about what occurred last night. For that reason, we are making counselors available to our officers in order to navigate through the emotions this tragedy has created. The involved officers have been placed on paid administrative leave at this time as is customary in these types of situations. I realize that as devastated that we may feel, it does not compare to the pain felt by the family of the deceased.”

Brooks said the Contra Costa County District Attorney’s Office is leading the investigation to ensure transparency and will have the full corporation of his staff. He further explained if officers were at fault, he would expect them to be held accountable to the fullest extent of the law.

There will also be an independent third-party investigation into this incident according to Brooks.

“Should there be any violation of Antioch Police Department policies, I can ensure the community I will hold these officers accountable for their actions,” stated Brooks. “Regardless of the outcome, these investigations will be available for public review once completed. It is important that our community understand and have the opportunity to review the facts and circumstances surrounding this incident and we are committed to open and transparent in this process.”

Brooks called today’s information preliminary and additional information may become available as the investigation continues and more information could be released in the future.

Brooks stated during the media portion of the press conference that he fully supports body cameras. He also confirmed he informed the Mayor of the incident after it happened.

Referring back to the December 23 in-custody death, Brooks confirmed that the Mayor was informed of the incident “later”, not that night, by someone in the police department—at that point, Thorpe objected saying he was not notified.

Special Meeting
Although Thorpe said he would call for a special meeting Friday, that announcement has not yet been announced formally.

His proposals were as stated:

Thorpe closed by saying more would be coming out in the future as they are wrapping up the community conversations with the public.

As Mr. Thorpe is busy “expressing his condolences” he forgets that this person was violent, attempted to carjack innocent bystanders and was clearly wacked out on God-only-knows what mixture of drugs. It’s an unfortunate fact of life that police must sometime use force to subdue violent persons in the interest of public safety. This is not a “police failure.” It’s a behavioral failure on the part of the individual that led to unfortunate consequences.

No facts have yet been established yet Thopre is already getting his picture taken and running his mouth for more attention. This is a man whose ego is his only agenda..a man who recently lied and said no one had brought uo body cameras since 2017 yet ECT has posted minutes from their council meeting in whixh other members brought up cameras as recently as last month. This whole area has become a cesspool, a migratory watering hole for scum as they migrate from SF and Oakland to Stockton. Thorpe and others seem to want to blame the APD for other peoples bad decisions or blame those bad decisions on systemic racism. Well maybe there is systemic rscism but saying people did XYZ because of it takes away all autonomy and personal volition away from those people of color they claim to be standing up for. Makes them into unthinking automatons who are violent because they just cant help themselves. B.S. choosing crime is a perosnal choice everytime. This poor Lyft driver is trying to feed his family and had to suffer a violent incident, I hope your okay man. People scream for mental health crisis responders. I been s therapist and crisis responder for 10 years its a wonderful and rewardong career but we aint no magic workers. Cant calm everyone down no matter how hard we try..
If they on hard drugs its near impossible to. This push for crisis responders is settong them up with unrealistic expectstions. Next we will need crisis response reform. Despite the true statement that most with mental health disorders arent violent SOME ARE. If we consider that crime violence and lack of empathy are the hallmark symptoms of anti social personslity disorder then most offenders do have mentsl health disorders. The next time someone is shooting up a target lets call a psychiatrist to validate his anger and tell him its ok to vent. This guy was trying to get in peoples cars he was a danger tothe public. Sad he died but the public must be safe. What if it was your car he was trying to get into….what if your 4 year old was in the back seat.

Please go away Thorpe…APD will never get anything done with you in position.

After reading Chief Brooks’ narrative, it seems that APD did a damn good job of managing this situation. It’s sad that there was loss of life, but APD tried to calm, subdue, etc., this person. Unfortunately, tasers aren’t always useful or safe. However, what would Mayor Thorpe be saying if APD just allowed this man to run into traffic and be killed by a car? This was a no-win situation for both APD and this man.

Get the recall papers going people to get him and his knuckle head councilman out of office. You were elected to represent the people of Antioch and not there to present your agenda on the city of Antioch. You are a puppet and a thorn in the side of every person in this city.

I wonder how the Mayor would have handled the situation had he been there?

HE WOULD HAVE RAN AWAY LIKE HE DID ON HIS POLICE REFORM PRESS CONFERENCE ON MONDAY IN FRONT OF CITY HALL. HE RAN BECAUSE OF A PERSON WAS GETTING LOUD ABOUT BEING AGAINST HIM,
THE COUNSEL AND POLICE REFORM. HE RAN LIKE A LITTLE KID. RECALL HIM AND HIS RUDE COUNSEL WOMAN.

Just a quick question for Me. Thorpe:

Before Covid you were bemoaning the opioid pandemic, you know, where so many people just up and died in their chairs, beds, or gutters. So why would it ever be a surprise that someone wired up on meth, heroin or both would die in the act of exerting themselves to the extreme? Wake up. You are making a fool of your self. Put your ego in a suitcase and send it on a long trip somewhere.

How would Thorpe have handled the situation had he been there? He’d PISS HIS PANTS or worse!

The APD should totally ignore Thorpe and company! The APD has our backs!