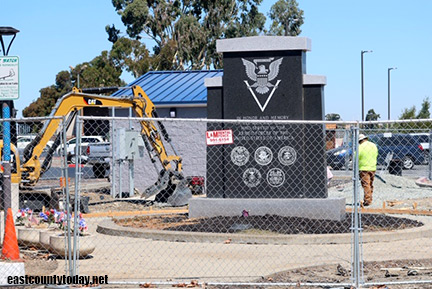 On Tuesday, the Antioch City Council provided feedback on a proposed design that will include moving the Veterans Memorial at the foot of L Street at the Antioch Marina.

The move came after construction for a new $425k restroom started and veterans became unhappy with the proximity of the restroom to the veterans memorial.  The City proposed placing some bushes to block the view of the memorial, but veterans were not happy with that solution.

After news broke of the restrooms proximity to the memorial, the veterans community and public called foul and demanded a change be made.  In response, the city held a meeting with JR Wilson and other local veterans to come up with a solution. Although no cost was included in the presentation, the solution was formally presented to the council for feedback. 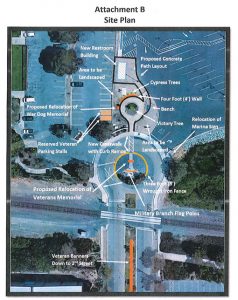 Wilson maintains that this process will turn a negative into a positive for the veterans community.

During Tuesdays meeting, Antioch Public Works Director John Blank explained that the bathroom project was approved in 2007. Now that it was being built, they received feedback that the bathroom was too close to the veterans memorial.

Blank explained the proposal was to move the monument, along with a bench, a victory tree, military branch flag poles, decorative wrought iron fence, moving the sign, along with the war dog memorial. Behind a proposed wall, there will be cypress trees.

During public comments, JR Wilson, of the Delta Veterans Group, spoke urging the council to get this design approved and work completed by Veterans Day.

“In light of the estimates not being a part of the staff report, we are going to ask the mayor ask the staff to put together a budget to come back to the city council for a vote with the intent of having full passage of our proposal with a dedication being this Veterans Day,” said Wilson.  “We are here today because of the city council passed whatever, we are here because there’s a bathroom next to our memorial that wasn’t publicity that we decided to have, but that decision has brought negativity and bad light to our veterans community.”

Wilson asked this be brought back at the next meeting with a budget so the work could be completed before Veterans Day.

“We also would like to know how long, how long do we in this community have to look at our memorial through a fence that is next to a bathroom?” asked Wilson. “That we had to ask the city to open up for Memorial Day.  How long?”

Wilson asked the council to turn this negative into a positive.

“The proposal that we put together on August 13th and that you just had outline is a way to bring a negative to a positive. We didn’t ask for the media to come, they came,” said Wilson.

Councilwoman Lori Ogorchock said she was for this project and wanted to see it completed before Veterans Day and said she would like to see the council move this forward as this council did not approve where the bathrooms were going to go.

“I personally did not understand that the bathroom was going to go there. I know in January this was put on consent calendar… I did not research and find out that the bathrooms are going to be so close to this memorial. So, I do apologize to the veteran’s community for that. But I am one to move forward on this.”

Councilwoman Monica Wilson asked about the timeline from the funding to completion.

Blank responded the timeline would be tough to complete by Veterans Day but they could get some of the work done to ensure a meaningful ceremony.

“I’m not very super competent that we can get it done. We just have to do too. We put together plan and go right to work and we’ve got an idea,” said Blank.

Mayor Pro Tem Joy Motts said this community has always been supportive of veterans with a veterans parade every year.

“I just want to make sure that the community knows that as soon as it was brought to our attention that the staff and city manager, Ron Bernall and all of us have been willing to do whatever we needed to do to try to make this right, make sure that we take care of honoring our veterans and veterans in the right way,” said Motts.

Motts said she liked the design, but requested the cost so they can move forward with a consideration.

Councilmember Lamar Thorpe agreed stating he was a veteran and never thought his colleagues or previous councils did anything to disrespect the veterans community.

Thorpe said he liked the design but was concerned with the cost before making a decision.

Mayor Sean Wright was in favor of the project.

“I am 100% behind this and moving forward,” said Wright who looked for a solution to get some of the work done before Veterans Day to make it a nice monument. “I would love to see as much as possible so when people see it that it looks like a finished product on Veterans Day.”

Blank responded they could move the monument and do some of the improvements to make it a nice ceremony.

Wright suggested they give the City up to $40,000 to get things started and move forward before coming back later when a cost is finalized. Blank said that was possible.

During the next meeting, City Staff will come back with a cost estimate and the council will decide on the project.

Thank you Lori for owning up to an oversight by the council on not asking where the location of the restroom would be placed. Sadly, in typical Lamar Thorpe fashion he blames everyone else for turning this into a hysterical event when if the council did their homework this would have been stopped ahead of time. Hope the people of Antioch are realizing this man is full of hot air.

Moving the memorial is the wisest thing to do, but I never thought a restroom near a memorial was disrespectful. I thought a restroom was serving a necessary purpose, and others were being overly sensitive. So I asked several veterans. Eight agreed that it’s no big deal, and three thought it was disrespectful. You can be respectful and supportive of veterans, without veterans having a sense of entitlement. A sense of entitlement (along any lines) is pathetic. The world doesn’t revolve around you – we’re all in this together. You have to learn to compromise, and sometimes you just have to go with the flow. It’s a smoother ride.

Go fight in Iraq and see how disrespectful those bathrooms are. Prick.

Agree. Mother of two Marines here, one still in active duty. Disrespectfully. And also, how about housing homeless vets with $425,000 and forgetting wc altogether.

I think it’s more disrespectful that you be okay with your offspring being pawns and fighting the rich mans war. Being exposed to the horrors of combat and the brain washing of boot camp into a mindless robotic soldier. There’s nothing patriotic or honorable about what’s gone on in the Middle East. Americans are getting sick of having to give respect to military invading other peoples home lands, murdering innocent civilians, decimating communities, all under the false flag of “fighting for our freedoms” or to give others “democracy”. It’s all a sham.
There hasn’t been an honest war since WWII.

I agree with Melanie. Too many veterans hold a grudge against society. Do something with your life when you get back, and get over yourself.

So I have fought in Iraq I was there in the first invasion and than two more tours. I honestly appreciate the bathrooms because I didn’t enjoy shitting in sand or in a bucket full of diesel fuel. I appreciate a clean bathroom that is close by, just in case of emergencies. So go fuck yourself with the Iraq war card. You signed the dotted line and knew that war was probability and the world doesn’t owe you shit. Oh yeah I also did tours in Afghanistan should I hate showers?

Nick,
I am a Veteran of 15 years of service 3 tours of Iraq/Afgan and 4 over seas tour. You are spot with your statement and I agree with you. A lot of vets walk around thinking that the world owes them everything and they don’t have to do shit. I work a construction job, attend college, and drive Uber so I can be a productive member of society. I am sorry that you feel that way towards Vets, but that is they way they act. Lol most of them are pussies like Wisely

Nancy needs to be laid. I am sure she drives a Ford vehicle also

Just lose the restroom all together. It will be riddled with waste, needles, alcohol bottles and trash in no time. I hate sounding negative but watch and see. Eventually it will always be locked like the one at Amtrak.