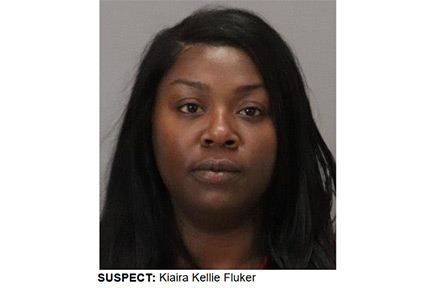 On August 28, Milpitas Police traveled to the City of Antioch to arrest Kiaira Fluker, 31, in connection with commercial burglary where suspect stole $7,000 worth of merchandise.

According to police, she was transported back to Milpitas where she was booked into Santa Clara County Jail for commercial burglary, grand theft, organized retail theft and the warrant. Two other suspects are still unknown and remain at large.

In a press release, Milpitas Police say on August 2 at about 8:32 p.m. officers responded to a report of a theft at Big 5 Sporting Goods, located at 757 East Calaveras Boulevard, where three suspects stole $7,000 worth of merchandise.

The suspects were last seen leaving the area in a grey 4-door Nissan Altima in an unknown direction. Milpitas Police Detectives have been working this case and obtained security camera footage of the suspects from Big 5 Sporting Goods, which helped identify Fluker as one of the suspects.

Fluker was identified as a suspect in other sporting goods store thefts in Daly City, Napa, Redwood City, Sacramento, Sunnyvale, and Walnut Creek.  Detectives learned Fluker had a $50,000 Ramey arrest warrant for grand theft from the Sacramento Police Department.

Like an STD!! The hood rats keep spreading out of that shit hole known as Antioch!! The Black Plague!!

They haven’t been called STD’s since the 1990’s. You’re outdated just like that term.

Wow.. I think you need a hug. You are angry at Antioch. Some of those folks who live in that “Shit Hole” .. work hard, not ghetto, don’t do drugs, never went to jail, own there home, and this all is also a ? plus have children who live and work in this “Shit Hole” and never experienced any of this things. You know Antioch isn’t the only place that have issues, Dayton , Ohio.. Las Vegas, Odessa, Tx so on so on

And I dont live in any of those shit holes either !! Lol
Antioch used to be a nice place!! The migration has destroyed it!! And its only getting worse!!

Yet you knew exactly what was meant…. disease is disease!!!
Lol