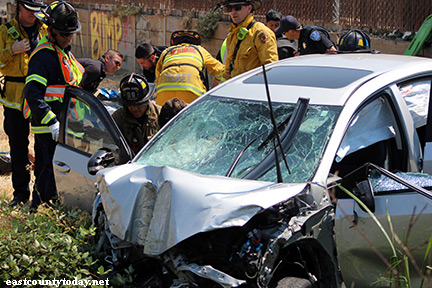 The Golden State has the 7th-highest rate of deadly hit-and-runs per capita, according to new report from AAA Foundation for Traffic Safety

WALNUT CREEK, Calif — More than one hit-and-run crash occurs every minute on U.S. roads, according to new research from the AAA Foundation for Traffic Safety. These crashes resulted in 2,049 deaths in 2016 – the highest number on record and a 60 percent increase since 2009.

In California, there were 337 hit-and-run crashes involving at least one fatality in 2016, the latest year with available data. That total is the highest on record for the state, and the most in the nation. Texas (233) and Florida (206) were the only other states with more than 100 fatal incidents.

“This is a growing traffic safety challenge and trend that is moving in the wrong direction,” said Michael Blasky, spokesman for AAA Northern California. “As a safety advocate, AAA wants to bring awareness and identify potential solutions to reduce hit-and-run fatalities.”

Despite California’s record total in 2016, some cities are proving more effective at reducing traffic fatalities. In San Francisco, there were 20 total fatal crashes in 2017 – the lowest number in the city’s history. Still, 16 of the 20 deaths were pedestrians or cyclists, the most common hit-and-run victims.

To decrease the chances of being involved in a crash with a pedestrian or bicyclist, drivers should:

Currently, every state has laws that make it illegal for a driver involved in a crash to flee the scene. State penalties vary depending on the type of crash. If found guilty, drivers can face large fines, lose their license or spend time in prison. AAA encourages drivers to educate themselves about specific hit-and-run laws in their state and remain alert on the road to prevent crashes from occurring.

If a driver is involved in a crash, they should never leave the scene and follow the steps below:

“It is every driver’s legal and moral responsibility to take necessary precautions to avoid hitting a pedestrian, bicyclist or another vehicle,” Blasky said. “It is incumbent on each and every one of us to stay alert, be aware of our surroundings and always stay on the scene if involved in a crash.”

The AAA Foundation for Traffic Safety, established in 1947, is a 501(c)(3) not-for-profit, publicly-supported charitable educational and research organization. Dedicated to saving lives and reducing injuries on our roads, the Foundation’s mission is to prevent crashes and save lives through research and education about traffic safety. The Foundation has funded over 300 research projects designed to discover the causes of traffic crashes, prevent them and minimize injuries when they do occur.  Visit www.AAAFoundation.org for more information on this and other research.

AAA Northern California offers a wide array of automotive, travel, insurance, DMV, financial services and consumer discounts to its 4 million members. AAA has been a leader and advocate for the safety and security of all travelers since it was founded more than 117 years ago.  Visit AAA.com for more information.

What a shock. We are the largest state.

We also have 1 million illegals with drivers licenses.

Duh, the way people drive and respect it’s not a surprise. Be careful on the road cause the disrespectful idiots are definitely out there.

This is why I got some dash cams

Another reason we left Kalifornia. Illegals with D.L. And no insurance.