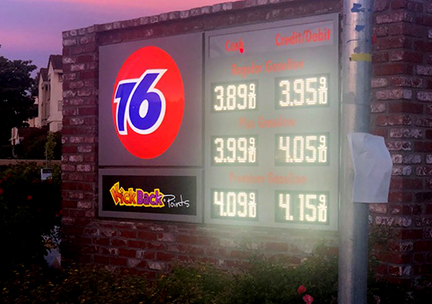 AAA reported Monday that the national average of a gallon of gas dropped 6 cents on the week which continues a downward trend since Memorial Day. They even called the decline “unusual” for this time of the year.

California continues to be the most expensive state for a gallon of gas at $3.81 per gallon with Hawaii right behind with $3.64 and Washington at $3.41.

The EIA’s recent report for the week ending on June 7 showed that West Coast gasoline stocks increased slightly by 90,000 bbl from the previous week and sit at 30.8 million bbl. The current level is 700,000 bbl less than last year’s level at this time, which could cause prices to spike if there is a supply disruption or gas demand surges in the region this week.

“Growing gasoline inventories are contributing to relief at the pump as we head into summer,” said Jeanette Casselano, AAA Spokesperson. “Current U.S. inventories sit at nearly 235 million bbl, which is helping to feed growing demand.”

ABOUT US
We focus on Antioch, Bethel Island, Brentwood, Discovery Bay, Oakley and Pittsburg,. We will also feature materials relevant to Contra Costa County and political news out of Sacramento.
Contact us: [email protected]astcountytoday.net
FOLLOW US
© 2017 eastcountytoday.net | Privacy | Terms of Use