At around 4:00 pm, the East Contra Costa Fire Protection District was dispatched to a full vegetation fire response in Brentwood after a report of a column of smoke.

Engine 59 had responded to investigate the column of smoke believed to be out of county, however, upon further investigation, they stated the fire was believed to be a wind driven 20-acre fire in county off Orwood Road. 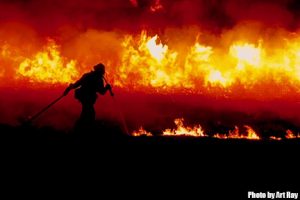 Engine 59 also stated they believed the fire was burning into the levee and making their way out to Cruiser Haven Yacht Club. They were still trying to make access.

By 4:13 pm, Engine 59 arrived on scene and reported they had two fires at 20-40 acres each. They also requested the Contra Costa County Sheriffs Office as they were aiming to protect a large marijuana crop and requested five additional type 3 units to the scene.

Battalion 5 reported at 5:08 pm, the fire had reached around 60-acres and were letting the fire burn itself out. Engine 59 was protecting structures. Engine 53 reported a tractor and a truck in a ditch.

By 9:00 pm, the fire was contained and firefighters were wrapping up the incident. The fire was estimated at 20-30 acres.

UPDATE
The Fire District confirmed the fire had burned 30 acres. They used water drops from a helicopter to assist and allowed the fire to burn itself out through controlled burns.

The cause of the fire is under investigation. No injuries were reported.

Same tax dollars putting a roof over their heads also. Lol, State is a joke

Realtor.com – Start looking, you deserve to be out of this State

California taxes the hell out of marijuana. That’s what prop 215 and 420 were all about. Totally insane? Come on, it’s 2019. Get off your rocking chair grandpa.

So, who’s a grandpa?

Burton! I agree! Wasting tax-payer resources to protect some dope growing acreage? I would have used a flame thrower to wipe it out entirely!

Lori! Shooting a burning arrow from even a distance would wipe out that crop pronto!

I love reading excuses posted by dopers and stoners whose brains have been addled from smoking this shit! They are so easy to spot!

All you silly rabbits drinking booze and looking down your drunken noses at those who bother no one but you in your ignorant, alcohol-laden minds. The rest of us laugh at your archaic pomposity.

So, just who is drinking alcohol, Cody? Is it always one (dope) or the other (booze)?

So is everyone in discovery bay eating like crazy by now. I agree, don’t use our resources for this. Geez.

Quite a few of those marijuana growing sites in unincorporated Brentwood. One spark? They’re GONE!

Time for a nice bonfire!

BURN, BABY, BURN! But then the shit would stink up the whole valley!

I need to go and check that place out. Heh heh!