Update: Man Wanted by Pittsburg Police After Shooting, Turns Himself In

The Pittsburg Police Department is looking for a man who allegedly shot at another man in the 100 block of Shannon Street approximately 7:30 am Friday in the City of Pittsburg.

According to police, the suspect was armed with a firearm and had retreated into a residents and the man who had been shot at fled on foot.

Police said responding officers were able to determine that the two men are longtime associates and were apparently having an argument before the shooting.  It was also determined through witnesses that the man who had been shot at did not appear to have been injured.  Based on the information obtained, Detectives with the Investigations Division authored a Search Warrant for the residence which was served by the Pittsburg Police Department’s Tactical Team. 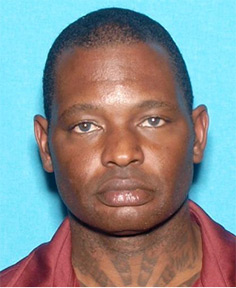 After searching the residence it was found that the man was no longer inside and most likely fled before officers arrived.

As a precaution, an extensive search of the surrounding neighborhood was also conducted. Evidence was found at the scene confirming that a shooting took place, but no firearm was located.

By Friday afternoon, Detectives were still actively working to locate the man who had been shot at.  The man responsible for the shooting has been identified as 42 year old Pittsburg resident Jeremy Dodson.

Dodson is wanted by the Pittsburg Police Department and is considered armed and dangerous.  At this point his whereabouts are unknown.  If anyone has information, please contact Detective Curtis Kingman at 925-252-6912.

Antioch: Bail Set at $4.2 Million for Suspect Arrested in Shooting Co-Worker at Popeye’s

The place looks like an armed camp. I bet the dog can get a good whiff of the guy — these guys usually really stink so the dog will have no problem following his “scent.”

I know what you mean! These guys just reek to high-heaven

“These Guys” yes grace you are a racist ass whore. Why don’t you go fuck your brother, you white trailer trash cunt. I bet you smoke Pal Mal cigarettes and drink the 99 cent single shot cheap liquor store counter rum. You probably think that Hamburger helper is a full four course meal all in one. Still the only hooker on the street that slings her nasty vag for crack, and sips wine out of a box. Maybe you are a classy honky and drink 25oz of Rolling rock still sipping on some MD 20/20 strawberry mango white bitch. Either way I heard there was a bag of cash on the BART tracks in bay point!! Go jump down there and crab it, reach way down in there. Don’t worry Bart isn’t running today.

Well white boy , you certainly seem to be well versed in the habits and products enjoyed by the demographic group you think this ‘Grace’ belongs to. In fact you know it so well I’d say you must have first hand experience in her supposed environment.

I live in Antioch lmao! Close near Romis I bought my house when the neighborhood wasn’t ghetto. Lmao

Sorry to surprise you, Tod, but I have no brother, I don’t smoke nor drink hard liquor. What in hell is “Hamburger Helper?” My favorite wine is Dom Perignon … What is “Rolling Rock?” Sounds like musical group. I have never been on BART. As to the whore part, I think you’re thinking of your Mother. I think you may have a crack in your brain. There is help, if you ask for it!

Tod, stop projecting your own insecurities on other people. It’s not working!

Now we know you are full of lies you whorish grace. We know you lie because you say you don’t know hamburger helper. Unless you live under a rock or never seen a television than you can say that you don’t know what it is. I am sure that Dom is your drink, I am sure you are sipping it while looking through Facebook on EastBay news. Lmao

I don’t do FACEBOOK and I think you’re more familiar with this hamburger helper (whatever it is) than I am. Bon Appetit! Actually, I’m a vegetarian.

I still think you should apologize to your mother for what you’ve called her. Tod!

Sock it to him, Grace! You’ve got him totally insane! Don’t stop, girl! This White Boy Tod and Whore are the same person. I bet he has a rap sheet a mile long. A low-life is just that, a low-life!

Did the police find OLD STINKY yet? I bet he left a trail to die for!

None of this has any relevance to this article you need to all understand that this is not Facebook or Twitter it’s comments about the article and i have a real comment to say about my good close friend Jeremy Dodson. He was never violent in anyway shape or form people took advantage of him none stop i see why he would have snapped. He was a caring and kind friend he always helped myself and my family he always opened up his home to us no matter what and to everyone else who walked to his door needing a place to stay. He had one of the biggest hearts there are out here in Pittsburg. He is and will always be a genuine person to me. I pray he doesn’t get much time cuz he doesn’t belong in jail. My husband and i tried to help him as much as possible but no one can fix a broken heart. He was going though a terrible heart wrenching divorce and his xwife was wrong the way she left him. People can only take so much when others are.taking advantage of there kindness and using it as a weakness. He had so much to give and always had love for his kids. He never had a bad bone in his body. Jeremy Dodson if you get this we love you so much and appreciate everything you did for us even when it was last minute you never said no. We’ll be here whenever you need us we will miss you dearly. Thanks for being a genuine friend.

Hey Dave Vargas? You have a “husband?” Maybe he can talk this big-hearted man to turn himself in and explain what happened. If people took advantage of him, then he was a doormat! By the way, “a broken heart” is A CHOICE one makes!

I don’t think I will leave my house for awhile. All the shootings going on and the racist shit being voiced on this thread it is like a war zone. No matter what color we may be, it seems like we are all targets. Grace and Tod sound like 10 year old girls fighting over their Barbies, maybe they should just both crawl back in their holes. I also love how people add fuel to the fire. I always come on ECT to see the educated comments on serious articles

Grace cut Tod down to the point where he is crawling now. Way to go, Grace! Don’t let the pukes ever get you down. Fight on! And . . Danny … Grace is RIGHT! You have to deal with reality, Danny! It’s really not the color of someone’s skin. It’s the BEHAVIOR!

There is no way on this God’s Green Earth I would ever be found at some state fair or festival today even if there were no active shooters. Stay home, don’t contribute to the horrendous traffic problem, interact with your family, read a good book, work on a hobby, call your parents.

So, Danny R! You find it acceptable for someone like White Boy Tod (who is obviously NOT white) attacking Grace by calling her vile names? Is that OK with you? Do you do this to women off the internet or even on it? You must really be a piece-of-work!

What exactly is “Kardashian” about Grace’s response?

Shup up, Danny! You’re the ASSHOLE!