At 2:30 pm Friday, Contra Costa County Fire Protection District responded to a report of a vegetation fire in the 9600 block of Deer Valley Road in unincorporated Brentwood.

While responding, a large column of smoke was reported which prompted a full vegetation fire response near Briones Valley Road. The cloud of smoke could be observed across East County which included Antioch, Brentwood, Oakley and Pittsburg.

Firefighters had access issues to the fire and were utilizing a private driveway to make access. Units from East Contra Costa Fire and CALFIRE were also responding.

UPDATE – Cause
According to East Contra Costa Fire Battalion Chief Jake Gonzalez, the fire appeared to be accidental in nature due to the use of a “gopher bomb” to eradicate gophers which caused a small fire which quickly grew to 7-acres. Cal-Fire investigated the incident as the fire was in the State Responsibility area. 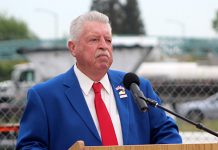