State Democrats are calling for the removal of Craig Cheslog as Region 2 Director for the California Democratic Party after recent “inappropriate behavior” was reported, which also triggered an accusation of rape.

Cheslog, who was elected to the Acalanes Union High School District Board of Trustees, was not available for comment. He has since been fired from his position at Common Sense Media after their investigation.

According to the letter which was provided to ECT on December 11, California Democrats have received multiple reports that Mr. Cheslog acted in an inappropriate and sexually aggressive manner towards one of their members in the public areas of the Westin San Francisco Airport hotel November 18, 2017, at the Winter 2017 CDP Executive Board Meeting.

Based on witnessing the activity,  one of their members subsequently reported to the Chair that Mr. Cheslog had raped her at a CDP Executive Board meeting the previous year (November 2016).

Here is a copy of the full letter: 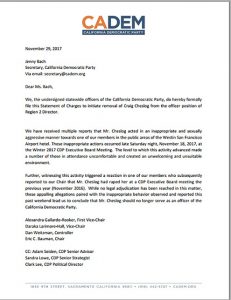 We, the undersigned statewide officers of the California Democratic Party, do hereby formally file this Statement of Charges to initiate removal of Craig Cheslog from the officer position of Region 2 Director.

We have received multiple reports that Mr. Cheslog acted in an inappropriate and sexually aggressive manner towards one of our members in the public areas of the Westin San Francisco Airport hotel. These inappropriate actions occurred late Saturday night, November 18, 2017, at the Winter 2017 CDP Executive Board Meeting. The level to which this activity advanced made a number of those in attendance uncomfortable and created an unwelcoming and unsuitable environment.

Further, witnessing this activity triggered a reaction in one of our members who subsequently reported to our Chair that Mr. Cheslog had raped her at a CDP Executive Board meeting the previous year (November 2016). While no legal adjudication has been reached in this matter, these appalling allegations paired with the inappropriate behavior observed and reported this past weekend lead us to conclude that Mr. Cheslog should no longer serve as an officer of the California Democratic Party.

In response to the allegations, Cheslog was terminated for “highly inappropriate behavior” by his employer Common Sense Media.

In a statement from Corbie Kiernan, VP of Communications:

On Wednesday November 29, we received information about highly inappropriate behavior by Craig Cheslog, who was an employee of Common Sense at the time. The conduct represented a serious violation of both company policy and the way in which our employees are expected to conduct themselves in the community at large. We immediately suspended Mr. Cheslog and conducted an investigation. As a result of the investigation, Mr. Cheslog’s employment with Common Sense was terminated.

Prior to working with Common Sense Media he worked office of Tom Torlakson, California’s Superintendent of Public Instruction, where he served as principal adviser since 2011.  Prior to that, Cheslog was Torlakson’s district director when he was State Senator and State Assemblyman representing Contra Costa County, CA.

Attempts to reach Cheslog for comment were unsuccessful and he has not responded to questions regarding the allegations.