At 3:49 pm Saturday, the East Contra Costa Fire Protection District was dispatched to a report of a garage fire in the 2700 block of Reddington Drive in the City of Brentwood.

Firefighters arrived at the home reporting with light smoke coming from the home and upon further investigation reported a garage fully charged with smoke and a sprinkler activation. Upon making entry to the garage, the fire was knocked down. 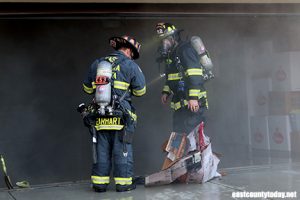 According to Jake Gonzalez, Battalion Chief, he said the resident arrived home and smelled smoke and heard an explosion from the garage and called 9-1-1.  There was also a 30-minute window between when residents had left the home and returned.

Steve Aubert, fire investigator, stated the cause of the fire was undermined, however, the origin of the fire came from a box that had not been opened for an estimated 5-yaers according to the homeowner. There was smoke and fire damage to the garage area, but the rest of the home was intact.

No injuries were reported in the incident.

Shots Fired During Attempted Robbery at In-N-Out in...

First Dead Bird of the Year and More...