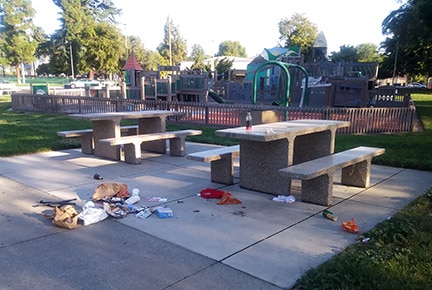 The Antioch City Council’s ad hoc committee on homelessness recently sent out a Facebook invitation to those interested in this issue.

“The Task Force is charged with gathering public testimony from regional, county and city agencies, community based organizations, faith community, homeless advocates and the business community to understand the impact of encampments on the local community.”  I was puzzled reading this as nowhere in the invitation were Antioch residents invited.  I called Council Member Joy Motts for clarification, and she stated that the meetings were open to anyone and I could come if I wanted, however there was no meeting scheduled to listen to the testimony of housed residents of Antioch about the effect of the homeless epidemic on their lives.

In an effort to be heard by our elected officials, our Neighborhood Watch group met to discuss this issue, and forwarded our concerns to Ms. Motts.  This is not the first time I have written to council members about the issues facing those of us living in the A Street Corridor area, and though I don’t always agree with her, I would like to commend Ms. Motts for answering my emails.  I have also received responses from Council Member Lori Ogorchock and Mayor Sean Wright.

I have not heard back from emails sent to Council Members Lamar Thorpe and Monica Wilson.

I feel that it is important for our elected officials to hear about the impact of homelessness on residents not only in my small neighborhood, but throughout Antioch, about the challenges the ongoing influx of homelessness has brought to our lives.   I would like to use this forum to present my testimony publicly and invite others to comment and share their testimony.

What is life is like for those of us living in the A Street corridor, where well-meaning ministries encourage the homeless to congregate in our parks, on our waterfront, in our shopping centers, and along the nearby railroad tracks?

Basically, what used to be a nice walkable neighborhood has degenerated into a dangerous slum.

The issue of public safety is particularly concerning at City Park, where on a daily basis large numbers of homeless people congregate.  This park is a disaster.  Everyone has a right to use a public park, however no one has the right to vandalize public bathrooms, deal drugs, sit atop the picnic tables so that nobody else can use them, and sleep on the tables and playground.  It is not a right to defecate in the park, let dogs run loose, and kill the trees.  There is garbage everywhere at City Park.  Some of the garbage is a result of people with a charitable bent leaving behind “gifts” for the homeless.   A public park where children play is not a place that should be serving as an open-air homeless shelter.

Homelessness also impacts goods and services available in our community.  My credit union on A Street left for Pittsburg after an increasing number of people complained about the area.  One of the banks here abandoned Antioch also.  Our local grocery store closed, the nearby bike shop left for Brentwood, and the flower shop on A Street was destroyed in a fire set by the homeless.  My local gym no longer allows day use of the pool due to the abuse of the day pass by homeless people.  Storefronts all along A Street are empty.

When I go into a store nearby or stop to pump gas, I am inevitably panhandled inside the store, in the parking lot, and at the pump and have to walk past a gauntlet of the homeless to get inside the shops.  This limits my desire to shop locally.   Much as I would like to support businesses that still survive here, I find myself taking my sales tax dollars to neighboring cities.

Our neighborhood has also seen an increase in crime and violence with the influx of homelessness.  Petty theft and auto burglary are rampant. Where the homeless with addiction issues hang out, drug dealers move in.  Our neighbors used to have an annual pot luck picnic in City Park.  We no longer do that since the last time we gathered together two homeless people in the park started fighting, assaulting each other with large sticks.

It is important that as our city moves forward, whatever concessions are made and money spent on the homeless, that it does not further destroy the quality of life for housed residents here.

Putting even more facilities to draw the homeless to residential areas and business centers is a mistake, for example the county’s decision to use our local library on 18th street as a homeless shelter.  At no point did the county inform or reach out to local residents about this.  If only our city and county officials realized the impact of their actions on our lives!

As I have already exceeded the editor’s word count.  I leave it up to you now.  Share your testimony here in the hope we can understand the impact that the homeless explosion has had on all of us who live in Antioch.

What do you have to say?