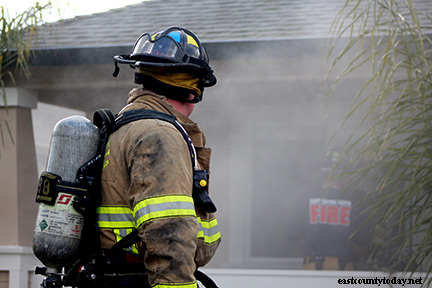 Hal Bray, a co-founder for East County Voters for Equal Protection (ECV), highlighted how the fire district used to have 8-stations, now it has 3 stations funded and 1-funded part-time. He also showcased how there are 5-days a month on average where when people call for fire service, there is no one to respond and they decline the call.

“They don’t have enough people to respond to a fire or medical emergency,” says Bray. “So we are working with the county, the cities, and the schools to fund the fire district.”

The AUSD receives about $2 million in property taxes for the facilities within the East Contra Costa Fire Protection District.

In total, ECV is asking for 30 agencies to shift a combined $7.8 million of the $154 million of property taxes collected within the East Contra Costa Fire Protection District jurisdiction to the fire district.

Under the plan, the agency recipients of the ad valorem property tax to voluntarily shift a small portion (5.2 percent) of their property tax allocation percentage to the fire district. District taxpayers would not be asked to pay any additional taxes.

Due to Mr. Bray’s presentation being within public comments, the District Board or Superintendent could not respond.

According to State Law, School Districts are off-limits and cannot voluntarily give up funding to another District.

99.02. Computations for transfer of revenues between local agencies. (a) For the purposes of the computations required by this chapter for the 1985–86 fiscal year and fiscal years thereafter, in the case of any transfer of property tax revenues between local agencies that is adopted and approved in conformity with subdivisions (b) and (c), the auditor shall adjust the allocation of property tax revenue determined pursuant to Section 96.1 or its predecessor section, or the annual tax increment determined pursuant to Section 96.5 or its predecessor section, for those local agencies whose allocation would be altered by the transfer.

(c) If the board of supervisors or the city council concurs with the proposed transfer of property tax revenue, the board or council shall, by resolution, notify the county auditor of the approved transfer.

(d) Upon receipt of notification from the board of supervisors or the city council, the county auditor shall make the necessary adjustments specified in subdivision (a).

(e) Prior to the adoption or approval by any local agency of a transfer of property tax revenues pursuant to this section, each local agency that will be affected by the proposed transfer shall hold a public hearing to consider the effect of the proposed transfer on fees, charges, assessments, taxes, or other revenues. Notice of the hearing shall be published pursuant to Section 6061 of the Government Code in one or more newspapers of general circulation within each affected local agency.

(f) No local agency shall transfer property tax revenue pursuant to this section unless each of the following conditions exists:

(1) The transferring agency determines that revenues are available for this purpose.

(3) The transfer will not impair the ability of the transferring agency to provide existing services.

(4) The transfer will not result in a reduction of property tax revenues to school entities.

Eric Volta, Liberty Union High School District, has already stated they will not be giving up any revenue to the fire district due to state law prohibiting it.

Good grief if these guys had any clue they would be getting on agendas and present their plan. Not bird dog agencies during public comments and say they are working with the county, cities and schools. ECV is disillusion and a year later are still ignoring state law by asking schools to give up funds. THEY CANT! Meaning all other Districts now have to pay more under the plan.

By the way, just because ECV presents a plan, doesn’t mean anyone is working with them.

Idiots, the Antioch School District is 99% within CONFIRE aside from Orchard Park. If anything, they should help CONFIRE should they ever even have money to give away. We have laws for a reason, perhaps ECV should follow the law instead of pushing a DOA plan.

If they have Property Tax money to give away, then return my portion to me first.

Besides everything you have all mentioned the school district and city of Antioch are both on thin ice facing bankruptcy. Go to Brentwood who has a 30% slush fund to spare and would use the most support from fire. You guys are loco.

These individuals which include Hal Bray and Bryan Scott have been told repeatedly their idea is unlawful and a non starter. The documents all read that schools are off limits and reallocation isn’t likely at all. Yet they purposely continue to cloud any meaningful discussion. IMHO they are putting us all at greater risk by suggesting a free solution. It won’t happen because there are no free rides. While Bray and Scott have no accountability the policy makers do. The law is the law and for good reason.

And to the individual on Facebook that suggests using ERAF, it is obvious she has no idea what ERAF is or how it came about. It is a mandated educational reallocation augmentation fund “ERAF” which cannot be used for any other purpose. The commenter really needs to do her homework.