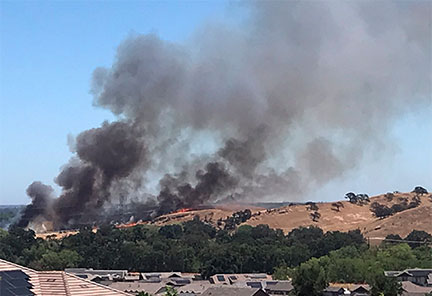 Just before 1:00 pm Friday, the East Contra Costa Fire Protection District responded to the area of Marsh Creek Road and Vasco for a report of a vegetation fire.

The fire was reported by several callers who confirmed the fire was outside of yesterdays 75-acre burn area and was spreading. A large column of smoke was observed from fire stations responding. A full wildland fire response was dispatched by East Contra Costa Fire as well as by CALFIRE.

By 1:00 pm, Engine 52 arrived on scene reporting the fire was burning along Vasco Road and requested CHP for traffic control. It was also reported the fire had jumped the highway and burning west.

1:17 pm UPDATE
Fire at 50 acres with moderate spread. The fire is also being reported on both sides of Vasco Road.

Teen Charged with Murder in Shooting Outside Brentwood...

Teen Arrested in Deadly Shooting Outside of 24...

Updated: 1 Dead, 3 Others Wounded in Shooting...

I hope they catch whoever’s setting these.