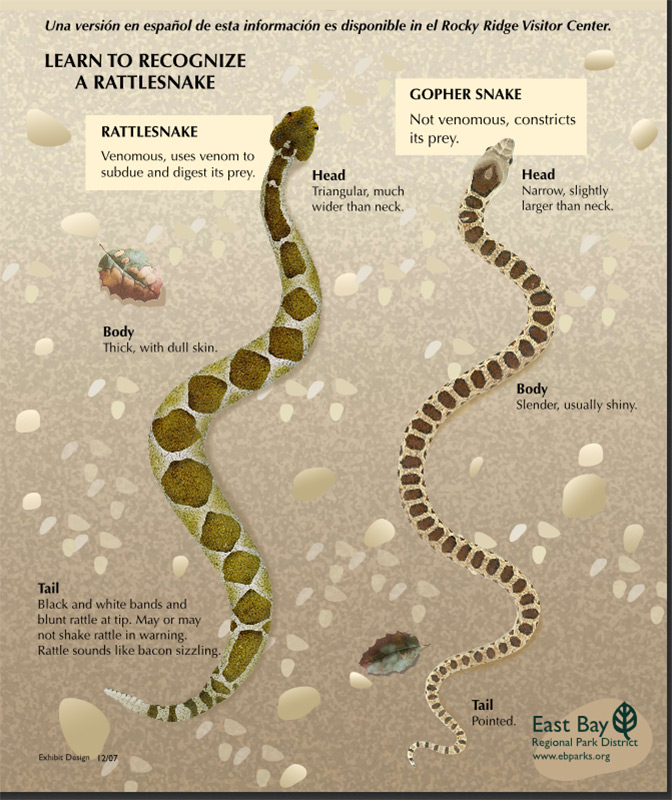 The following was submitted by the East Bay Regional Park District regarding rattlesnake safety in the local regional parks.

A reminder from the East Bay Regional Park District that Spring and Summer are active snake seasons in parks and open spaces.    Park District staff advises that as the weather heats up, rattlesnakes especially become more active. They, like humans, like to explore when the weather gets warm.  Snakes are able to regulate their body temperature by moving in and out of shade. A warmer body allows a snake to move faster when trying to catch prey. Depending upon the kind of snake, they eat insects, slugs, frogs, birds, bird eggs, small mammals, and other reptiles.

Several kinds of snakes live in the Bay Area. Most snakes are harmless to humans and pets, but any snake will bite in self-defense. Because a rattlesnake bite is poisonous, it is considered a medical emergency: call 9-1-1.

Within the past week, the Park District staff has received six reports of rattlesnake sightings, including today when a 47-year-old male who was bitten by a rattlesnake this afternoon near the top of Mission Peak Regional Preserve in Fremont.  The victim was taken by helicopter to the hospital and is recovering.  Over the weekend a pet dog was bitten by a rattlesnake at Del Valle Regional Park in Livermore on the Arroyo side along the trail.  A park ranger assisted the owner to his car so the dog could be taken to his vet.   Additional rattlesnake sightings were reported at Castlerock Regional Recreation Area in Walnut Creek in a picnic area, on the Delta DeAnza Regional Trail in Pittsburg as well as in the parking lot outside of EBRPD Police Headquarters at Lake Chabot Regional Park.   No snake bites were  reported with those incidents.

Park staff urges taking snake safety precautions when visiting regional parks especially at this time of year.   A Common Snakes brochure is available and may be downloaded from the Park District’s website, www.ebparks.org.  Search for “common snakes.”

Learn to recognize a rattlesnake.
Rattlesnakes have a triangular head, much wider than the neck, thick body with dull skin, black and white bands on tail, blunt rattle at tip. May or may not shake rattle in warning. Rattle sounds like bacon sizzling.  Contrast to a gopher snake, which is not venomous.  A gopher snake’s head is narrow, and only slightly larger than the head. The body is slender and usually shiny. The tail is pointed.

If you see a rattlesnake on a trail: Leave it alone. Do not try to capture or harm it. All park wildlife is protected by law.  Wait for it to cross and do not approach.  Then move carefully and slowly away.

What to Do if Bitten by a Snake:
If bitten by a rattlesnake, stay calm and send someone to Call 911. The victim should remain calm by lying down with the affected limb lower than the heart. Do not waste precious time on tourniquets, “cutting and sucking,” or snake bite kits. If you are by yourself, walk calmly to the nearest source of help: another person, a park employee, or a phone to Dial 911. Do Not Run.

If bitten by any other kind of snake, leave the snake alone. Wash the wound with soap and water or an antiseptic and seek medical attention.

If you are not sure what kind of snake bit you, check the bite for two puncture marks (in rare cases one puncture mark) associated with intense, burning pain. This is typical of a rattle snake bite. Other snakebites may leave multiple teeth marks without associated burning pain.
While snake sightings are common in the regional parks, it is generally a rare occurrence to be bitten by one.  But it does happen, so please be aware of your surroundings while enjoying the parks.

Snakes are an important resource in the natural environment. They are prime controlling agents of rodent, insect, and other reptile populations. They must be enjoyed from afar and left where they are found. It is illegal to collect, kill, or remove any plants or animals from the East Bay Regional Park District.   Please help us to protect wildlife and their environment for present and future generations.

Don’t assume your local vet can help! Anti-venom shots are around $500 so too expensive to keep in suuply. My brother’s dog was bitten last year on Mare Island Preserve, and because local vet’s didn’t have the treatment he had to go to UC Davis. Maybe more vet’s carry the serum this year because of the increase in rattler population.