The East Contra Costa Fire Protection District invites the community to its ribbon cutting ceremony for Station 55 in the City of Oakley.

In September of 2018, when built, the $5.7 million station will replace Station 94 in Knigthsen and Station 55 will have a life cycle of around 55-years. When it becomes staffed, its anticipated due to placement, it will cut down on response times by 50% to Bethel Island, Knightsen and portions of Oakley.

According to the District, Station 55 is designed at 7,500 square feet which is smaller than Station 53 in Oakley which includes a 1,400 sq ft multipurpose room, a 3,080 sq ft engine bay and 2,400 sq ft storage for equipment and apparatus. 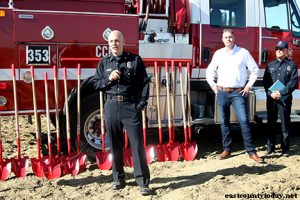 Fire Chief Brian Helmick explained that while there are questions about why they would build a fire station when they do not have funding to staff it, he noted it was about preparing for the future and having infrastructure in place for when funds do become available.

“We are preparing for growth. We are preparing to increase and fix our infrastructure. So in the very near future when revenue does come into the district, we can better serve the members of our community,” said Helmick. This is just the beginning of many things that are here to come.”

He also noted that while the infrastructure is being built, it will now allow the District to focus on finding opportunities for new revenue to become available.

“Back in 1998, we were talking about this firehouse was going to be built in roughly two-to-three years and literally 20 years later, we are breaking ground,” said Oftedal. “This is an historic day for the District getting info structure that’s much needed for the district and getting a firehouse in this area that could potentially cut our response times. Once this firehouse is operational cutting those response times in half in this area. This is going be huge for the district, it is a huge hurdle for us. I know we have a number of other hurdles that we need to get over a, but this is a big day for us.” 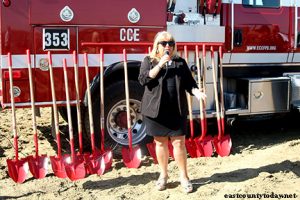 Oakley Mayor Randy Pope highlighted how public safety was the highest priority of the community and appreciate the hard work by the East Contra Costa Fire Protection District.

“We know more staff and facilities are needed for the District in the future and we are pleased to partner with the District to bring this station online,” said Pope. “We look forward to a very large celebration when this project is complete and we know this facility will serve all the residents of the fire district for many decades to come.”

The fire district will announce a community ribbon cutting next fall once the station construction is completed.

Oakley Out of the Darkness Walk Set for...